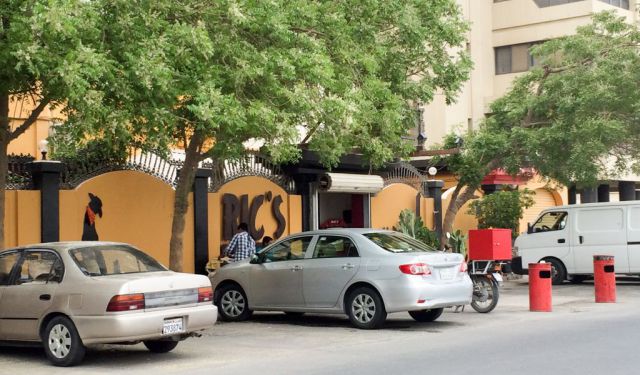 Manama: Eats, Nightlife and a Museum, Manama, Bahrain (B)

In my quest to visit more of the Middle East this year, I decided to go to Bahrain over the weekend. It is a very short flight. The airline website says it is 55 minutes, but the flight back was about 20 minutes. I wasn’t keeping track on the flight over as I fell asleep! A friend of mine who is also interested in exploring the Middle East came with me.

The first thing I noticed when I walked in was the giant aerial photograph of Bahrain that was on the ground of the main floor. It was very cool to see the scale of Bahrain. My friend and I walked around trying to find our hotel, but we think it was underneath a model display. The first floor had two temporary exhibits. One was on folktales and the other movie costumes from a specific designer. I don’t know who the designer was as I missed the label and the museum doesn’t have a good website. The permanent exhibit spaces on the first floor contained artifacts of the Dilmun civilization, which encompassed Bahrain and other Middle Eastern countries. Many of the artifacts were very old, but in very good shape. There were seals, pottery, coins, scrolls, documents and metalwork on display. Upstairs there was a life-size Souq with dioramas. While dioramas are no longer the norm in museums, they were great even if some of the mannequins needed a facelift. Look in the photo gallery for the poorly taxidermied cat! I think the dioramas worked because you walked through them instead of them being faced out behind glass. It felt very real. There were two other galleries that were being renovated that looked intriguing. I will have to pay a visit the next time I go to see what becomes of them. ...... (follow the instructions below for accessing the rest of this article).
This article is featured in the app "GPSmyCity: Walks in 1K+ Cities" on iTunes App Store and Google Play. You can download the app to your mobile device to read the article offline and create a self-guided walking tour to visit the attractions featured in this article. The app turns your mobile device into a personal tour guide and it works offline, so no data plan is needed when traveling abroad.