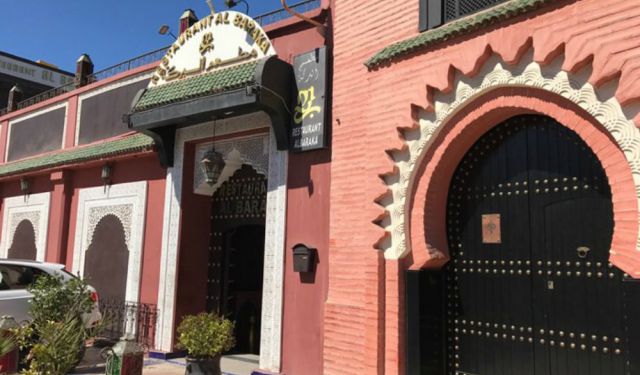 So today we began our vacation club’s Morocco Dreamtrip in Marrakesh. My friend Suman and I loaded the bus at 8:30am with our new-found friends, Jimmi and Margit from Sweden and Nina and Brien, Americans who live in South Korea, among others. Nina is originally Filipino, but due to Brien’s job and her resulting opportunities it is better for her to have a U.S. passport.

Our first stop on the tour in Marrakesh was the Koutoubia Mosque, which takes its name from the Arabic word Koutoub, meaning book as there used to be a large booksellers’ market nearby. Built in the 12th century, the Moorish mosque became a model for mosques around Morocco and even La Giralda in Seville, Spain. Its minaret is 77 meters high and is topped with three golden orbs representing three holy places; Jerusalem, Mecca, and Marrakesh’s medina.

From the Koutoubia Mosque, we wandered through the Marrakesh medina to the Mussée Dar Si Saïd. This museum was once a 19th century palace. The palace was built with a courtyard with four surrounding rooms for the four wives that Muslim men were allowed. Having said that, the new king discourages polygamy. The decorative rooms now display pottery, jewelry, tapestries and leather work. ...... (follow the instructions below for accessing the rest of this article).
This article is featured in the app "GPSmyCity: Walks in 1K+ Cities" on iTunes App Store and Google Play. You can download the app to your mobile device to read the article offline and create a self-guided walking tour to visit the attractions featured in this article. The app turns your mobile device into a personal tour guide and it works offline, so no data plan is needed when traveling abroad.