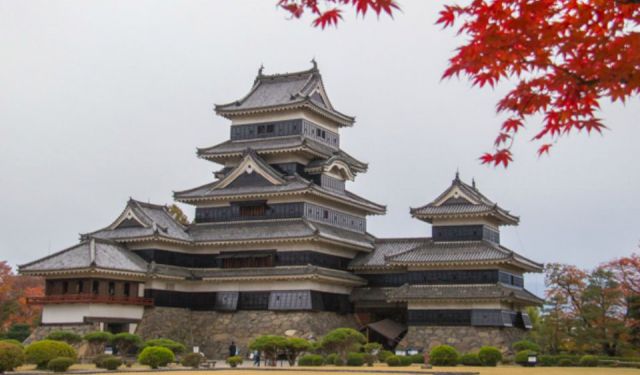 Matsumoto - A Taste of Traditional Japan, Matsumoto, Japan (B)

Matsumoto, in Japan, is a beautiful blend of ancient and modern. Strolling down the modern main streets I realised something was missing. The street lighting is not fuelled by an intricate web of overhead power lines as they are in every other city I had visited. The local authority passed an edict that the power lines should be underground and their disappearance has certainly enhanced the beauty of this town and given it a crisp, clean and modern appearance.

But, turn down a side street and some traditional treasures await. Just off find on map the bright red Shinto poles of the Jorinji shrine draws you inside this attractive little shrine. This shrine is sited in a complex that includes a temple. The complex is notable because its wooden gate is the oldest gate in Matsumoto. The gate was built during the Edo period between 1688 and 1704 and is decorated with many beautiful carvings by the famous craftsman Yutenjidainisei Yukaijoto. The shrine was built by Lord Ogasawara in the mid-sixteenth century and over the centuries has been protected by many important people. When the upkeep became too cumbersome during 1872 (Meiji 5) but was recently re-opened. ...... (follow the instructions below for accessing the rest of this article).
This article is featured in the app "GPSmyCity: Walks in 1K+ Cities" on iTunes App Store and Google Play. You can download the app to your mobile device to read the article offline and create a self-guided walking tour to visit the attractions featured in this article. The app turns your mobile device into a personal tour guide and it works offline, so no data plan is needed when traveling abroad.