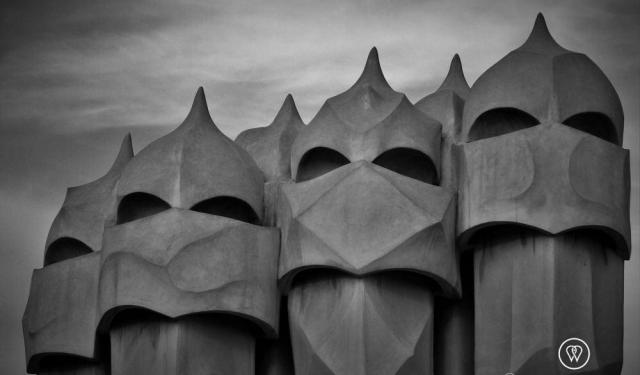 La Pedrera is an innovative & iconic building in the heart of Barcelona designed by Gaudí. Some say its rooftop may have inspired George Lucas as he was writing Star Wars…

In 1854, the city walls of Barcelona were demolished and an urban plan to extend the city was conceived. This is how the grid of El Eixample district came to life. To the contrary of the narrow medieval streets, this modern city was making life more comfortable for the wealthy who could afford moving there. The Passeig de Gràcia was its most prestigious street. And this is the street Pere Mila & Roser Segimon chose to commission the most fashionable architect of the time, Gaudí, to design La Casa Milà on an 1835-square-metre lot. As it was typical for the bourgeois, the couple was to live on the main floor of the residential building and rent out the other floors to generate revenue.

In his 50’s, Gaudí is at the top of his art. He has just finished renovating the Casa Batlló, just 500 metres away. With the Casa Milà, he is going further and defying the conventions of the time, even in the midst of Catalan modernism. He demands to work in total freedom. His ideas are not always approved by the promoters as he is off budget; and off fashion according to his contemporaries. The Casa Milà with its very stony façades is soon baptized La Pedrera (The Quarry) by the incisive press. ...... (follow the instructions below for accessing the rest of this article).
This article is featured in the app "GPSmyCity: Walks in 1K+ Cities" on iTunes App Store and Google Play. You can download the app to your mobile device to read the article offline and create a self-guided walking tour to visit the attractions featured in this article. The app turns your mobile device into a personal tour guide and it works offline, so no data plan is needed when traveling abroad.