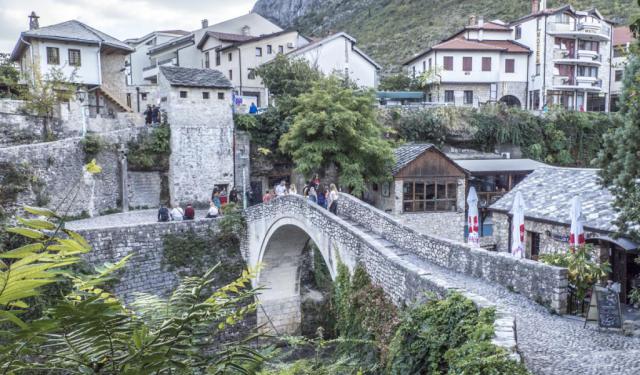 The majority of visitors to Mostar go straight to the area around its famous bridge, Stari Most. Preferring to avoid the crowds amassed in the old town centre I decided to leave that area until last.

As the narrow, cobbled streets of the old town of Mostar in Bosnia & Herzegovina are pedestrian-free all vehicles have to park on the outskirts. It was here that I discovered the Mostar Peace Bell Tower.

The Mostar Peace Bell Tower was completed in 2000. Built adjacent to the Franciscan monastery it was intended to be a symbol of peace. Citizens and visitors are invited to ascend the 107 metre tower, by lift and stairs (entrance fees apply) to a viewing area at 75 metres which opened in 2016. From here there is a 360° panoramic view of the city below. This tower, which stands beside the new Catholic church stands on what was once the front line separating Muslims and Christians during the war in the 1990s. Today, it is the tallest building in Mostar.R

Next to the Peace Bell Tower is the Catholic Church and Franciscan Monastery . The church, dedicated to Saints Peter and Paul, was also rebuilt in 2000. It replaced the church that was originally built on this site in 1866 by the Ottomans then rulers of this region. Seven years earlier an acclamation had guaranteed religious freedom to Christians. Next to the church the Franciscans built a monastery with a well-stocked library. The original church was badly damaged during the Second World War. It was rebuilt during the 1980s but this new church was then destroyed by the Yugoslavian National Army during the war in Bosnia and Herzegovina. As the Catholic community in Mostar continues to grow the new church is larger than the original building. ...... (follow the instructions below for accessing the rest of this article).
This article is featured in the app "GPSmyCity: Walks in 1K+ Cities" on iTunes App Store and Google Play. You can download the app to your mobile device to read the article offline and create a self-guided walking tour to visit the attractions featured in this article. The app turns your mobile device into a personal tour guide and it works offline, so no data plan is needed when traveling abroad.