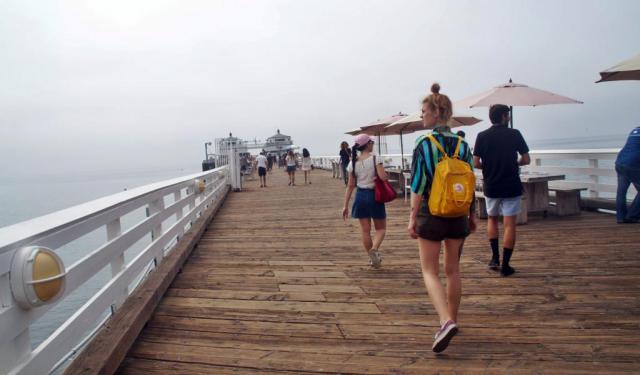 On August 9th, at 11.25 PM, 20 minutes late, we arrived in Los Angeles International Airport, after a long flight from Toronto. Getting from the airport to our motel, only a mere 20 kilometres away, wouldn’t take long we thought. But boy were we wrong!

Los Angeles may be one of the world’s most developed cities, but an easy way to get from A to B does not exist. We thought about getting a taxi, but it was too expensive, at 50 USD for a short 20 km ride. Instead, we opted for the bus and metro. We bought our ticket and figured we’d be home in less than an hour, but luck was not with us that day.

The metro line that we needed to go on had stopped running for the day, so we needed to find an alternative. Thankfully, two lovely security guards helped us figure out which three busses we could take to get to our motel.

The first bus would arrive 40 minutes later, and while we were waiting for it, we realized that we didn’t have any small change for the 1,75 USD bus fee! I only had a 100 USD note. I rushed back to the two security guards and asked if they could exchange my note. They couldn’t, but lovely as they were, they handed me four dollars straight out of their own pockets, so we were able to get on the bus! The woman, Bri, told us to get to our motel safely and to not speak to any strangers on the way. She referred to herself as our “mama outside of home”, and that evening she was definitely an angel looking out for us. This really goes to show how good people can be. ...... (follow the instructions below for accessing the rest of this article).
This article is featured in the app "GPSmyCity: Walks in 1K+ Cities" on iTunes App Store and Google Play. You can download the app to your mobile device to read the article offline and create a self-guided walking tour to visit the attractions featured in this article. The app turns your mobile device into a personal tour guide and it works offline, so no data plan is needed when traveling abroad.