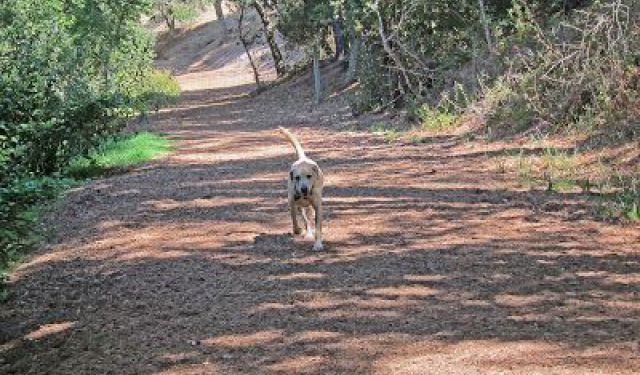 On a late summer Saturday morning in September I joined a group at the entrance to Mission Trail Nature Preserve across from Carmel Mission for a “Nature and Historical Walk” led by Melanie Billig, President of the FlandersFoundation. Melanie has been graciously conducting these free walks during the spring and summer months for over 10 years.

“The Governor took the road to Monterey, going through a dense forest of pine where were placed many great crosses, significant of Christ’s suffering. But they had not gone far before a band of choristers appeared, all wearing newly washed robes, attended by many young Indians in the dress of acolytes. They were closely followed by the padres marching in two wings.” (Californian Trails, Intimate Guide to the Old Missions, Towbridge Hall, page 230)

A year and a month after the founding of the Royal Presidio Chapel at Monterey in June 1771, Father Serra moved his church south six miles over a forested hill covered with oak, cypress, and pine to a marshy fertile area midway between the sea and the mouth of Carmel River. For the next 50 years or so the Padres would tread a well-worn trail with their sandals, back and forth between Carmel Mission and the Royal Presidio Chapel in Monterey in order to conduct Mass, deliver or receive supplies. ...... (follow the instructions below for accessing the rest of this article).
This article is featured in the app "GPSmyCity: Walks in 1K+ Cities" on iTunes App Store and Google Play. You can download the app to your mobile device to read the article offline and create a self-guided walking tour to visit the attractions featured in this article. The app turns your mobile device into a personal tour guide and it works offline, so no data plan is needed when traveling abroad.