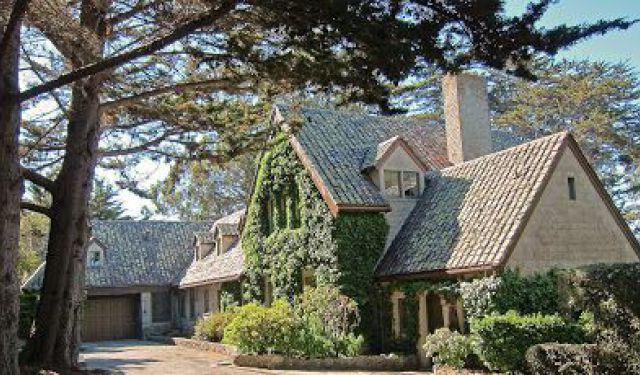 In the 1830's under Mexican rule, a number of ranchos were created around Carmel Mission. One of those ranchos was Cañada de la Segunda granted to Lazaro Soto in 1839 (yellow highlight).

His land encompassed 4,367 acres northeast of the mission. In 1851, Soto sold the rancho to Andrew Randall for $500. Randall got himself a little bit behind with some of his creditors and was murdered in a San Francisco hotel in 1856. Mr. Randall's land was subsequently aquired by his attorney, Fletcher M. Haight, in 1859.

In 1869 Faxon Dean Atherton (namesake of Atherton California) purchased the land. At his death in 1877 title transfered to his wife, Dominga Doni de Atherton who in 1888 hired William Hatton to manage her holdings. By 1892 the enterprising Hatton had purchased the land from Dominga. The picture above shows Hatton Fields in 1921, what would become the Flanders Mansion backyard.  ...... (follow the instructions below for accessing the rest of this article).
This article is featured in the app "GPSmyCity: Walks in 1K+ Cities" on iTunes App Store and Google Play. You can download the app to your mobile device to read the article offline and create a self-guided walking tour to visit the attractions featured in this article. The app turns your mobile device into a personal tour guide and it works offline, so no data plan is needed when traveling abroad.