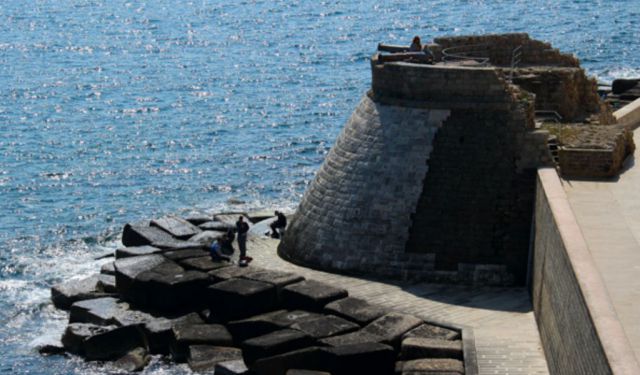 Monopoli's Old Town - Pretty as a Picture, Monopoli, Italy (B)

It was thrilling to stay in an apartment in the old town of Monopoli, Puglia and to take part in the daily dramas. One day, from our windows, we watched a small lorry, only six inches narrower than the street, take thirty minutes to reverse down it, accompanied by a lot of sighing and shaking of heads and some well meant but hardly practical advice. Once the show was over I skipped down two flights of narrow steps to ground level, placed my plastic bag of rubbish on the door step and then made my way through the alleyways that opened out in Piazza Garibaldi. My daily breakfast (included) was a coffee and a croissant at the Premiato Caffè Venezia. The square was quiet and I found a table outside where I could watch the town slowly come to life.

That day there was an unusual amount of activity for the hour – people were arriving with flags and banners. I moved on and was delighted to encounter the local band parading through the streets and after one wrong turn followed by a long discussion of the right way to proceed I found myself back in the square I had just left but now it was full of protesters and the band was stationary once more. ...... (follow the instructions below for accessing the rest of this article).
This article is featured in the app "GPSmyCity: Walks in 1K+ Cities" on iTunes App Store and Google Play. You can download the app to your mobile device to read the article offline and create a self-guided walking tour to visit the attractions featured in this article. The app turns your mobile device into a personal tour guide and it works offline, so no data plan is needed when traveling abroad.