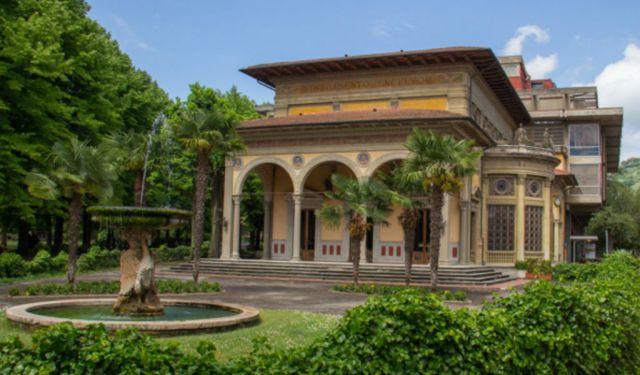 Montecatini Terme is the ideal base from which to explore its more famous neighbours in the Italian region of Tuscany. Early every morning cavalcades of touring buses roll down the wide, tree-lined avenues to collect their passengers. But those who take the time to stroll around its streets will soon find clues that suggest a glorious past. They may wonder why the modern commercial centre on Via Roma with its striped buildings reminiscent of Siena is fronted by such a grand façade.

This façade is all that remains of the Teatro Kursaal a large complex that was once central to the success of this little town during its years of prosperity. The complex of the Kursaal comprising a cinema, theatre, disco and a huge game room was founded at the beginning of the twentieth century by Montecatini Terme Casino, a private company. Visitors from all over Italy and beyond flocked here to enjoy the facilities. This golden era ended when the Kursaal was put up for sale but failed to attract any buyers that understood that this complex was central to the prosperity of the town. It lay abandoned and empty for many years until the beginning of the twenty first century when the Soc. Monaco di Verona di Luigi Ferro took it over and developed the site as a modern commercial centre retaining only the front section of the original building. Fortunately, not every building of this era has suffered the same fate. Via Roma leads into the main square, Piazza del Popolo. This large open square is dominated by the neoclassical Basilica of Santa Maria Assent. This relatively modern church replaced the nineteenth century church following its destruction. In 1988, Pope John Paul II proclaimed this church to be a minor basilica. Its imposing concrete exterior should not deter the visitor from stepping inside to admire the stained glass windows by the painter Giorgio Scalco. ...... (follow the instructions below for accessing the rest of this article).
This article is featured in the app "GPSmyCity: Walks in 1K+ Cities" on iTunes App Store and Google Play. You can download the app to your mobile device to read the article offline and create a self-guided walking tour to visit the attractions featured in this article. The app turns your mobile device into a personal tour guide and it works offline, so no data plan is needed when traveling abroad.