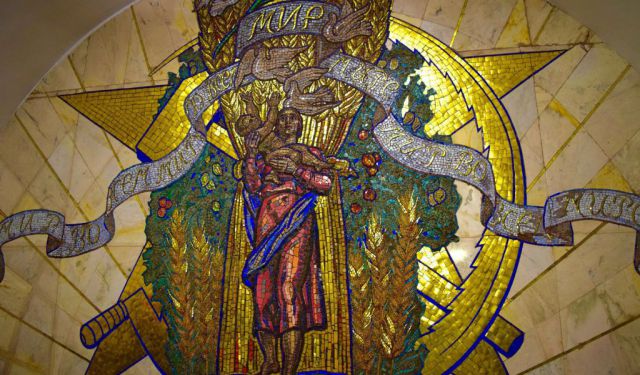 After visiting Moscow, I can certainly say that Moscow Metro is one of the most, if not the most beautiful metro in the world. Opened in 1935 with an 11 km long line and only 13 stations, it became the first underground system in the Soviet Union. Today, it has more 200 stations spread in a route of over 300km.

Built during the Soviet times as "the people's palace", originally its aim was promoting the communist ideals. While the tsars had constructed palaces just for their own enjoyment, Stalin constructed each station as an underground palace that each citizen and worker could enjoy.

Today, 25 years after the collapse of the Soviet Union, Moscow's metro can be considered an underground museum. Stations have an exquisite decoration, ranging from precious metals to semi-precious stones. Check out some of the best stations that you can't miss during your stay in Moscow!

We'll start our journey from Arbatskaya station, located right in the heart of Moscow and just at the beginning of Arbat Street, one of the main shopping streets of the Russian capital.  ...... (follow the instructions below for accessing the rest of this article).
This article is featured in the app "GPSmyCity: Walks in 1K+ Cities" on iTunes App Store and Google Play. You can download the app to your mobile device to read the article offline and create a self-guided walking tour to visit the attractions featured in this article. The app turns your mobile device into a personal tour guide and it works offline, so no data plan is needed when traveling abroad.