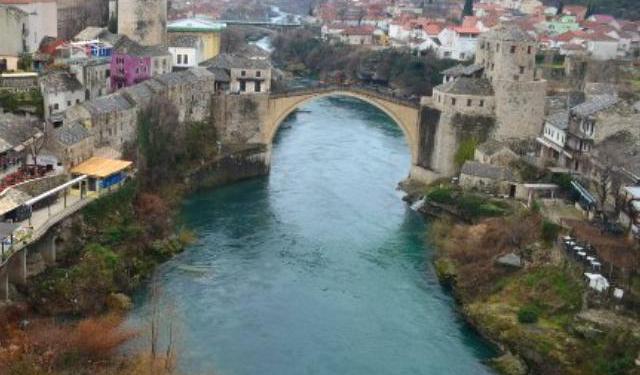 Mostar in a Weekend, Mostar, Bosnia-Herzegovina (B)

For many people, Mostar is a day trip from other nearby cities, but a day alone doesn’t do the city justice. Here are some ideas for things to do in Mostar in a weekend.

Mostar has a truly fascinating history, so the first thing you should do in Mostar is take a walking tour. Not only will it give you a lot of perspective about what you’re seeing when you’re walking around, a tour will give you insider tips on what to do while you’re in town. We toured around the city one morning with Sheva Walking Tours. The tours begin daily in front of the Turkish Hammam, a former bathhouse turned museum. The fascinating tour gives you information about the city’s complex history – including the war in the early 90s – from someone who lived it. You’ll learn in detail how Mostar was under siege by Serb and Croat forces and how the city presently deals with these geopolitical tensions.

If you want to know more about the history of the city than you can learn on a 2.5-hour walking tour, you can check out some of the museums in town. The Museum of War and Genocide Victims features artifacts and context to the brutality of the war that besieged Mostar from 1992 to 1995. Though terribly sad, the museum covers some of the atrocities committed during the war including the opening of concentration camps and genocide. Some of the items exhibited at the museum were recovered from mass graves. ...... (follow the instructions below for accessing the rest of this article).
This article is featured in the app "GPSmyCity: Walks in 1K+ Cities" on iTunes App Store and Google Play. You can download the app to your mobile device to read the article offline and create a self-guided walking tour to visit the attractions featured in this article. The app turns your mobile device into a personal tour guide and it works offline, so no data plan is needed when traveling abroad.