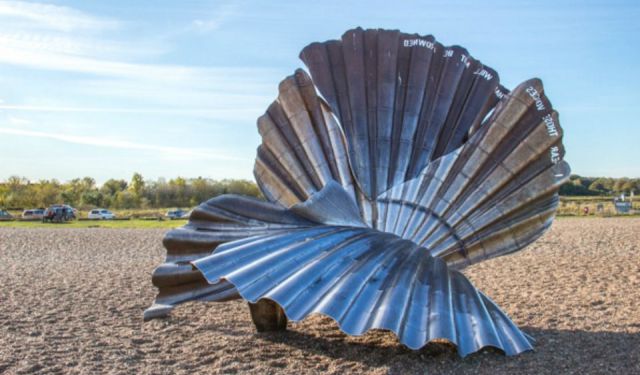 It was a glorious autumnal afternoon when I arrived in Aldeburgh, Suffolk. Not wishing to waste a moment of the sunny weather I set off to walk along its extensive pebble beach. It was not long before the aroma of fish and chips began to drift towards me. I noticed that the wall alongside the promenade, Crag Path, was lined with people eating fish and chips. It soon became too much as I had skipped lunch. I left the beach and followed a narrow alleyway up to the High Street where I followed a trail of bulging food bags to Aldeburgh Fish and Chips. It was doing a roaring trade and I joined the queue. I was just in time as they closed the door soon after I shuffled inside the shop. Fish and chips cradled in my hands I hurried back to the beach and sat on the wall to savour my repast. There were signs displayed forbidding the feeding of sea gulls. For once both parties obeyed.

Not long after I resumed my walk along the beach again I came across a small tower with a tiny viewing room on top. And a notice announcing that the tower was only open to visitors on Saturdays. This tower, the South Lookout Tower is used by artists during the week. There is a table outside the tower piled up with pebbles. Visitors are invited to draw a picture or leave a message on a pebble. Maybe later. ...... (follow the instructions below for accessing the rest of this article).
This article is featured in the app "GPSmyCity: Walks in 1K+ Cities" on iTunes App Store and Google Play. You can download the app to your mobile device to read the article offline and create a self-guided walking tour to visit the attractions featured in this article. The app turns your mobile device into a personal tour guide and it works offline, so no data plan is needed when traveling abroad.