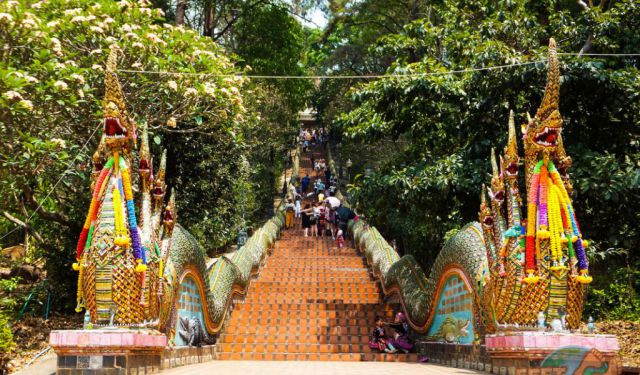 Chiang Mai is a place many tourists visiting Thailand would recommend; much quieter than Bangkok but still full of Thai history with plenty of temples to see.

A mountainous region with all the conveniences of a City, people travel here for a change of pace, oh, and for Songkran festival, which sees the population double during this 5-day event. We were in Chiang Mai for Songkran. There are plenty of things to do in Chiang Mai so we obviously visited the usual touristy parts, but we also did a few different things.

I want to start by talking a little about Thailand’s history. Up until 1939 (and between 1945-1949), Thailand was called Siam. If you are a fan of the Hollywood actor Yul Brynner, you may remember his movie “The King and I” or the later movie “Anna and the King”, both based on King Mongkut of Siam which were never shown in Thailand because they were considered derogatory to the King. How serious are they about their King? Thailand has the lese majeste rule, meaning that if you commit disrespectful acts toward the King, you could be imprisoned for treason. ...... (follow the instructions below for accessing the rest of this article).
This article is featured in the app "GPSmyCity: Walks in 1K+ Cities" on iTunes App Store and Google Play. You can download the app to your mobile device to read the article offline and create a self-guided walking tour to visit the attractions featured in this article. The app turns your mobile device into a personal tour guide and it works offline, so no data plan is needed when traveling abroad.