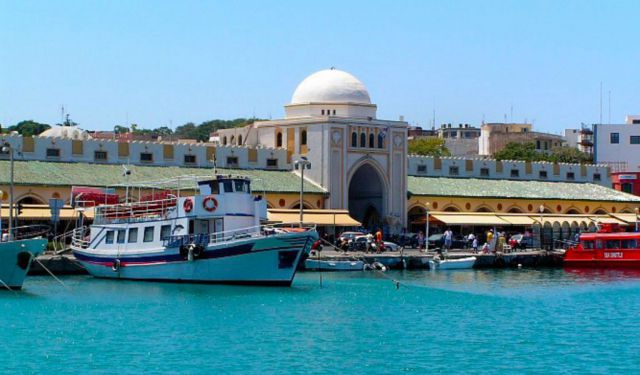 The New Town is not all that new. When the Greeks who did not leave Rhodes with the Knights in 1522 were kicked out of the old city and its protective walls they created new neighborhoods in the south called Marasia. They were joined by people who came from other islands and countries who settled in the northern coast of the island. This was called Neohori, or New Town. In the New Town you will feel like you are in a real modern city instead of a walled medieval fortress. Much of it was built by the Italians when they took it from the disintegrating Ottoman empire. There are stores, traffic lights,mansions, hotels that look like apartment buildings and plenty of cars and motorbikes. It is also remarkably clean and well-cared for, much more so than some other Greek cities.

The New Market near the harbor is a large 7-sided building with an outdoor central courtyard where the old fish market was located in the giant gazebo with the fish decorations. The front of the market has the fancy cafes which all seem to have the same identical strawberry sweets and pastries and waiters smile at you and try to herd you into the comfortable chairs. There are a variety of shops on the inside and the outside of the building including an excellent gourmet deli next to the fine traditional ouzerie Indigo (see food) along with a dozen or so grill restaurants, all with whole chickens and cuts of lamb and pork turning on rotisseries day and night. Between the New Market and the entrance of the Old City is a shaded park area where street venders sell sponges, shells, beads and jewelry and a line of painters wait to offer their services doing caricatures of the tourists who pass between the two towns. ...... (follow the instructions below for accessing the rest of this article).
This article is featured in the app "GPSmyCity: Walks in 1K+ Cities" on iTunes App Store and Google Play. You can download the app to your mobile device to read the article offline and create a self-guided walking tour to visit the attractions featured in this article. The app turns your mobile device into a personal tour guide and it works offline, so no data plan is needed when traveling abroad.