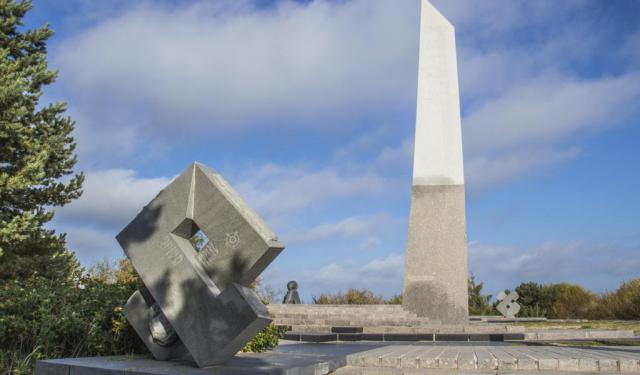 Nida on the Unique Curonian Spit in Lithuania, Nida, Lithuania (B)

Nida is a charming Lithuanian resort in the municipality of Neringa. It is spread across the narrow peninsula known as the Curonian Spit with the Curonian Lagoon on one side of the town and the Baltic Sea on the other. For centuries the Curonian Spit was constantly being re-shaped by its living sand dunes. Fishing villages were sometimes buried by them. However, since the nineteenth century, the local people have been trying to tame the drifting sand by planting pine forests. Although large areas of sand dunes remain amongst them are former fishing villages, like Nida, that have been transformed into resorts fringed by beautiful golden beaches. This unique landscape has been recognised as a world heritage site by UNESCO.

Lithuanians love to explain natural phenomena through legends. The creation of this long, thin sand spit is attributed to the female giant Neringa. She was the beautiful, good and courageous daughter of the rulers of this land. Neringa would wade into the sea to carry distressed fishing vessels back to the shore. One day, when a violent storm was raging and the sea was throwing so much sand onto the shore it threatened to bury her parent’s castle. Neringa filled her apron time and again with sand from the sea bed to create an embankment around the castle. Her action saved the castle and created the Neringa peninsula, known today as the Curonian Spit. Another version draws the same conclusion but features a dragon, Naglis. The dragon courted Neringa but when she turned him down he began o terrorise the local fishermen. Neringa built the ribbon of sand to keep the dragon away. There is a large statue of Neringa on the sea front of Nida. ...... (follow the instructions below for accessing the rest of this article).
This article is featured in the app "GPSmyCity: Walks in 1K+ Cities" on iTunes App Store and Google Play. You can download the app to your mobile device to read the article offline and create a self-guided walking tour to visit the attractions featured in this article. The app turns your mobile device into a personal tour guide and it works offline, so no data plan is needed when traveling abroad.