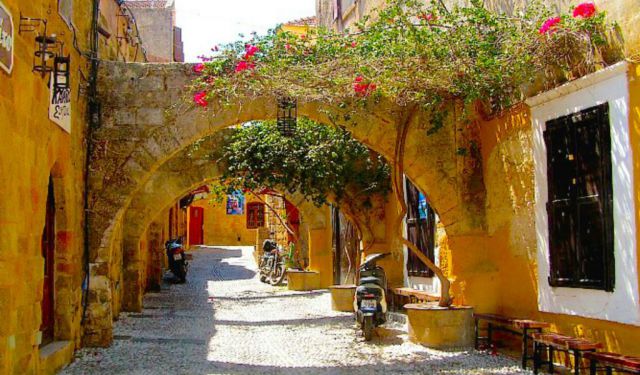 The Old City of Rhodes with a current population of 6,000 inhabitants is surrounded by medieval walls with seven gates: Gate of the Naval Station, Gate of Agios Ioannis, Gate of Agia Ekaterini, Gate of the Apostle Paul, Gate of Amboise, Gate of Agios Athanassios and the Gate of the Port. To enter any of these gates is to enter another world. Now it happens to be a world of tourist shops, restaurants, cafes and museums, more like a Turkish bazaar than any Greek city, but anyone with imagination can't help but be touched by the history of the place where a handful of Knights were the last Christian holdouts in a part of the world that had become completely dominated by Muslims, in particular the Ottoman Turks.

When the city finally did fall after a siege that exhausted both defenders and besiegers the remaining Knights were offered safe passage and on January 1st of 1523 left Rhodes along with 5000 of the Christian inhabitants of the island who chose to leave rather than live under the Sultan. In the defense of the city 2000 Christians had died. The Turks had lost 50,000 trying to take it. This is not, however just an old town filled with ghosts of the past. The old city of Rhodes is a living, vibrant community with many homes and business, not all of them connected to tourism. ...... (follow the instructions below for accessing the rest of this article).
This article is featured in the app "GPSmyCity: Walks in 1K+ Cities" on iTunes App Store and Google Play. You can download the app to your mobile device to read the article offline and create a self-guided walking tour to visit the attractions featured in this article. The app turns your mobile device into a personal tour guide and it works offline, so no data plan is needed when traveling abroad.