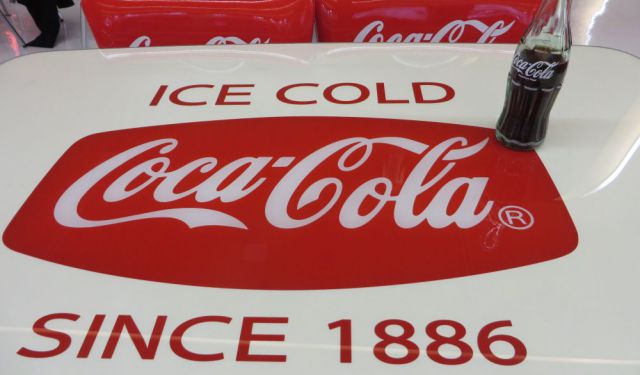 When your Japanese friends offer to take you to a Coke factory, you don’t say no. Last week, my culture club – a group of American and Japanese women – travelled together to the Tama Plant of Coca-Cola East Japan for a factory tour. We reached the plant, located in Higashikuru, in a little over an hour via two trains and a bus.

I don’t really drink much pop these days, but on occasion, I still crave the sweet taste of a Coke. One of the pleasures of living in Japan is getting to try different soft drinks than the ones I grew up drinking. Although Coke itself is a familiar brand, they produce a lot of beverages I would never find on the shelf back in Cleveland. More on that in a minute, though.

When we saw the signage, we started getting excited. It’s a fairly large complex, but after walking along its edge for a few minutes, we were able to enter past the guard. I liked the signage in the parking lot as we walked toward the factory entrance.

Coke, Coke Zero and Fanta are probably all familiar to my American readers, but what about Georgia? Or I Lohas? Georgia is a brand of coffee that is everywhere in Japan, especially in the vending machines. You can get a nice warm can of it for around a buck. (I love it in the winter.) I Lohas is bottled water with a subtle flavor added like aloe or mandarin orange. (I love it in the summer.) Aquarius is a sport drink, also commonly found in vending machines. (My first taste of it was rather confused because I thought it was going to be plain water.) Sokenbicha,a blended tea, is the green label written in Kanji near bottom right. The other Kanji-labelled drink is Ayataka green tea. ...... (follow the instructions below for accessing the rest of this article).
This article is featured in the app "GPSmyCity: Walks in 1K+ Cities" on iTunes App Store and Google Play. You can download the app to your mobile device to read the article offline and create a self-guided walking tour to visit the attractions featured in this article. The app turns your mobile device into a personal tour guide and it works offline, so no data plan is needed when traveling abroad.