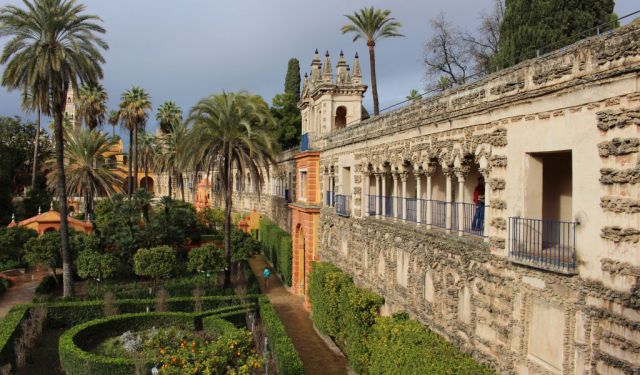 The largest city and capital of the autonomous community of Andalusia, Seville sits in the southwest corner of Spain, just over 500km from Madrid.

There are multiple flights daily between Madrid, Barcelona and other major cities to the Seville airport, running from 50-100 euro round trip on average. A ticket on a high-speed Renfe train runs 30-50 euro one-way. My two friends and I went by train to spend three days in the beautiful Andalusian city.

From the airport to the city center is about a 30 minute bus ride, which drops off at several points in the city. To get to the airport when we left Seville, we caught it at the train station out front, and I believe it was about 4 euros for the ride.

The Alcazar in Seville is a beautiful palace, originally constructed by Moorish kings in the 10th century, originally as a fort. Over the centuries, different reigning monarchs have made additions to the palace, giving it architectural and artistic complexity.

The expanse of gardens are extremely beautiful, speckled with orange trees and fountains. We even saw a peacock roaming about the grounds! ...... (follow the instructions below for accessing the rest of this article).
This article is featured in the app "GPSmyCity: Walks in 1K+ Cities" on iTunes App Store and Google Play. You can download the app to your mobile device to read the article offline and create a self-guided walking tour to visit the attractions featured in this article. The app turns your mobile device into a personal tour guide and it works offline, so no data plan is needed when traveling abroad.