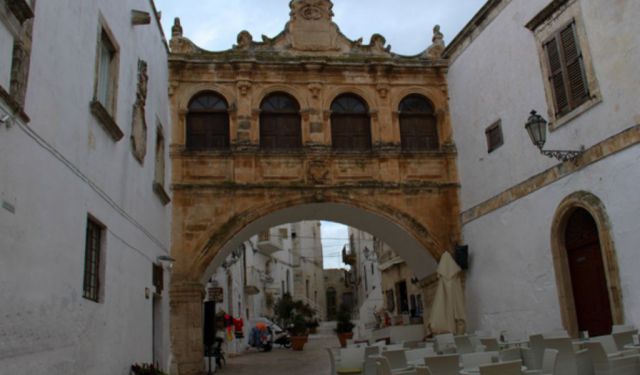 Ostuni, the White City of Puglia, Ostuni, Italy (B)

The view of Ostuni from the railway station was stunning, white buildings crouched on top of a hill. But – it was five kilometres away. I had walked past the local bus that meets every train because it was so small I thought it was a private mini-bus. There was only one option so I set off on foot. I had only been walking for a few minutes when a woman in her car stopped beside and I was asked if I would like a ‘passaggio’ (a lift). I accepted and we were soon speeding towards the town.

The directions I had been given to the old town were delightfully vague so I set off down the road and then asked for directions from a local who sent me round the back of the church of Maria Annunziata . Here I found the Post Office housed in the cloisters but there was no sign of an old town.

I tried again and this time I was directed down a narrow street that went downhill all the way to the Piazza della Libertà which is on the verge of the old town. This square is dominated by the Palazzo Municipale , originally the Franciscan convent of the Church of San Francisco d’Assisi and built in 1304. In 1739 the building was modified and then in 1864 it was enlarged, given a neoclassic facade and became the Town Hall. It also houses the Tourist Information office. ...... (follow the instructions below for accessing the rest of this article).
This article is featured in the app "GPSmyCity: Walks in 1K+ Cities" on iTunes App Store and Google Play. You can download the app to your mobile device to read the article offline and create a self-guided walking tour to visit the attractions featured in this article. The app turns your mobile device into a personal tour guide and it works offline, so no data plan is needed when traveling abroad.