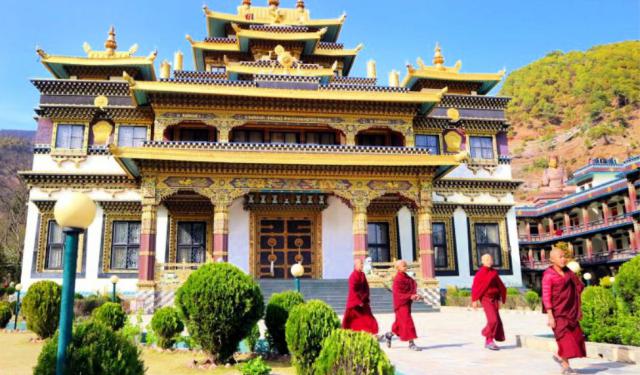 After finishing up a fairly exciting three day trek around the southwest portion of the Kathmandu Valley, we decided to stop in Pharping which was on the way home. It was a place I’d never heard of before, and I couldn’t even locate it on Google Maps. It seemed clear that this would be a quick overnight stop in a tiny town. Boy, was I wrong! Pharping has more things to do in it than Kathmandu! I honestly couldn’t believe it. We arrived and immediately felt at home. Within minutes, we had booked a second night at our hotel. Honestly, two nights wasn’t enough, and I can’t wait to go back. Pharping has several amazing day hikes, a bazillion Buddhist monasteries, giant statues of ancient gurus, Hindu temples, stupas by the dozen, and is home to the first hydro power plant in Nepal and the second in all of Asia!

Today, Pharping is most famous for its plethora of Buddhist monasteries. If you ask the monks, they’ll often grant you permission to walk around and take photos. The architecture reminds me of the temples I saw in northern Thailand. Many of the monasteries were built in the 2000’s making them fairly new. Pharping is a pilgrimage site for many Buddhists and houses many of Nepal’s monks. ...... (follow the instructions below for accessing the rest of this article).
This article is featured in the app "GPSmyCity: Walks in 1K+ Cities" on iTunes App Store and Google Play. You can download the app to your mobile device to read the article offline and create a self-guided walking tour to visit the attractions featured in this article. The app turns your mobile device into a personal tour guide and it works offline, so no data plan is needed when traveling abroad.