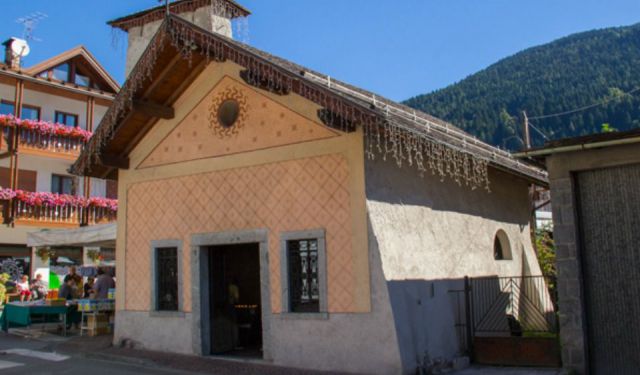 Pinzolo - A Traditional Town in the Italian Dolomites, Pinzolo, Italy (B)

Before tourism arrived in the area timber had been the most valuable resource. Six saw mills were in operation along the banks of the River Sarca that passed through Pinzolo as it wound its way through Val Rendena. When the mills were mechanised there was a need for skilled men to sharpen the blades. Many of the local men learned this skill, too many for the work available. The work was seasonal as the mills could not operate in the winter as the weather was too severe. These skilled workers were forced to find work further afield. Loading their sharpening equipment onto the barrows they had made they travelled, on foot, to large cities in Italy, and beyond. They would go from door to door offering to sharpen knives. Initially, these knife grinders or moleta would return to Pinzolo in the winter to work in the saw mills. But, as they built up regular rounds for their knife grinding many of them moved away or emigrated. Times were hard for those who remained in Pinzolo and they sought help from their relatives abroad. Many of these families survived thanks to the money that was sent home to them. When the local mountains became a popular place for skiing and walking these families were able to benefit by building hotels and holiday apartments, as well as setting up bars and restaurants and opening shops. As the area prospered many of the emigrants returned to live and work in the area once more. Set into the pavement beside the road into the centre of town is a line of granite stones. Each one has the name of a town carved on it. There are eighty-nine of them and they start in Trieste and finish in Wellington, New Zealand passing through places such as London, Lucerne and Chicago on the way. Each of these towns had received knife grinders from Pinzolo in the past. ...... (follow the instructions below for accessing the rest of this article).
This article is featured in the app "GPSmyCity: Walks in 1K+ Cities" on iTunes App Store and Google Play. You can download the app to your mobile device to read the article offline and create a self-guided walking tour to visit the attractions featured in this article. The app turns your mobile device into a personal tour guide and it works offline, so no data plan is needed when traveling abroad.