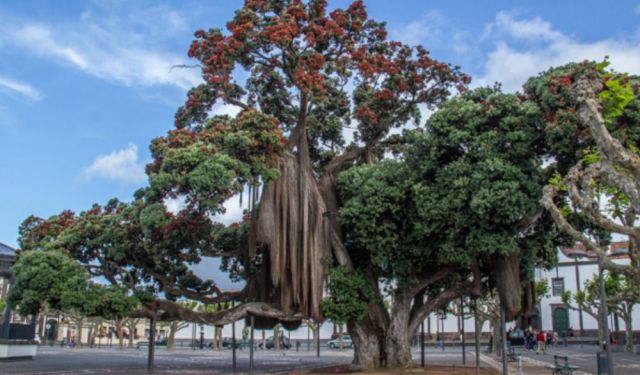 Architecture is the most striking aspect of Ponta Delgada on the island of São Miguel in the Azores archipelago. Simple whitewashed buildings striped with black basalt stand out against a backdrop of green vegetation beyond the town. This architecture originated from Portugal of which the islands are an autonomous region. Each island has developed its own variations. São Miguel developed a window–door–window-style with simple decorations around these openings. White and black basalt was always used for important buildings and there are many in Ponta Delgada.

Originally a simple fishing village Ponta Delgada was destined to become the capital of São Miguel the main island in the Azores archipelago. When the islands were discovered and settled in the fifteenth century due to its strategic position Vila Franca do Campoquickly developed as the most important harbour and became the first capital of São Miguel. However, in 1522 Vila Franca suffered almost complete devastation during an earthquake and Ponta Delgada became the focus of government and religion. It was granted city status before becoming the new capital. Its sheltered harbour soon developed as the main port of the island. During the sixteenth, seventeenth and eighteenth centuries this port became an obligatory stop and supply station for shipping between Europe and Africa and the Americas. As trade flourished so the city grew and prospered. By the eighteenth century convents, churches and manor houses were widespread. Its historic centre still features some of these buildings. ...... (follow the instructions below for accessing the rest of this article).
This article is featured in the app "GPSmyCity: Walks in 1K+ Cities" on iTunes App Store and Google Play. You can download the app to your mobile device to read the article offline and create a self-guided walking tour to visit the attractions featured in this article. The app turns your mobile device into a personal tour guide and it works offline, so no data plan is needed when traveling abroad.