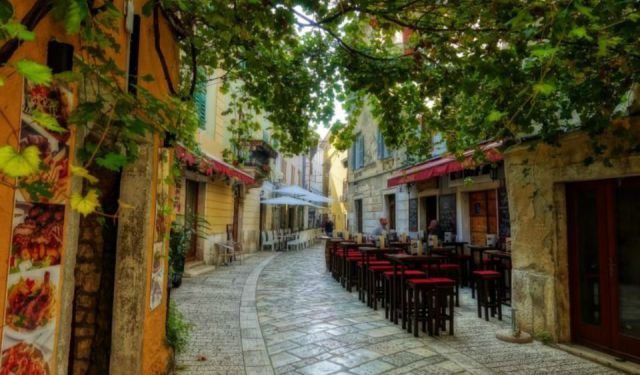 Porec (pronounced Por-etch) is a unique Mediterranean city on the West coast of Croatia on the Istrian Peninsula. It serves as a gateway to Slovenia and Italy, with an influence of the neighboring countries felt throughout the small town. The history of Porec goes back 6,000 years. It was ruled by the Romans, Byzantines, Venetians, and Napoleon and was once a part of the Austro-Hungarian Monarchy, Italy, and Yugoslavia.

The Old Town of Porec was once protected by fortified walls and towers which were constructed between the 12th and 16th century. Some of these structures still remain today. In 1997, the Euphrasian Basilica in Porec was named as a UNESCO World Heritage site.

We explored Porec on our small ship cruise with eWaterways. It was our last stop and served as our hub of transportation following the cruise. There are many interesting features that make this a memorable city to explore on any cruising itinerary.

Many gather in the town center to admire The Church of Our Lady of the Angels. enjoy the Italian cafe vibes, and take advantage of the free city Wi-Fi. ...... (follow the instructions below for accessing the rest of this article).
This article is featured in the app "GPSmyCity: Walks in 1K+ Cities" on iTunes App Store and Google Play. You can download the app to your mobile device to read the article offline and create a self-guided walking tour to visit the attractions featured in this article. The app turns your mobile device into a personal tour guide and it works offline, so no data plan is needed when traveling abroad.