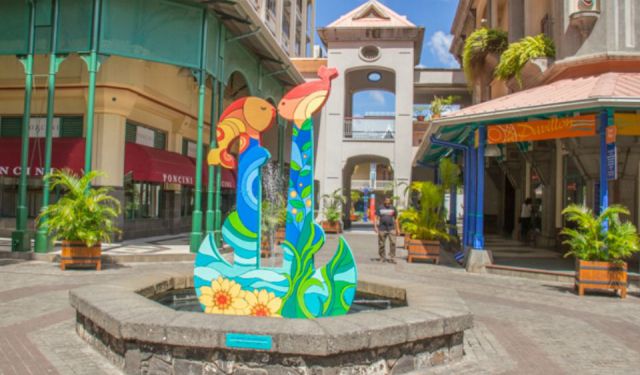 Port Louis and Pamplemousses on Mauritius, Port Louis, Mauritius (B)

Mauritius in the Indian Ocean is an entrancing mixture of old and new, lagoons and mountains and Africa and Asian. As we journeyed from our base at the Tamassa Resort in the southern part of the island we had glimpses through the tree-lined road of sandy coves penetrating a rocky coastline. This small volcanic island (1,865 square kilometres) was formed around a central plateau and is ringed by coral reefs which have formed shallow lagoons fringed by white coral sandy beaches. None of its mountains are very high but they do offer protection from the strong winds that sometimes batter the island. For this reason the island’s capital and largest port, Port Louis, was built in the lee of the Moka Mountain Range. We entered the capital through the Le Caudan Waterfront a sophisticaed stretch of shops, offices, bars a casino and a luxury hotel.

Le Caudan Waterfront was named after a French settler on the island Jean Dominique Michel de Caudan. When he arrived on the island in the eighteenth century it was known as Ile de France. He started a salt pan close to its capital which was then known as Port North West. This saltpan is now known as the Robert Edward Hart Garden not far from Le Caudan Waterfront. Once known as the Pleasure Ground it was a very popular place for the citizens to meet but although the gardens are still maintained by the municipality it’s popularity has waned – no doubt overshadowed by the new waterfront. ...... (follow the instructions below for accessing the rest of this article).
This article is featured in the app "GPSmyCity: Walks in 1K+ Cities" on iTunes App Store and Google Play. You can download the app to your mobile device to read the article offline and create a self-guided walking tour to visit the attractions featured in this article. The app turns your mobile device into a personal tour guide and it works offline, so no data plan is needed when traveling abroad.