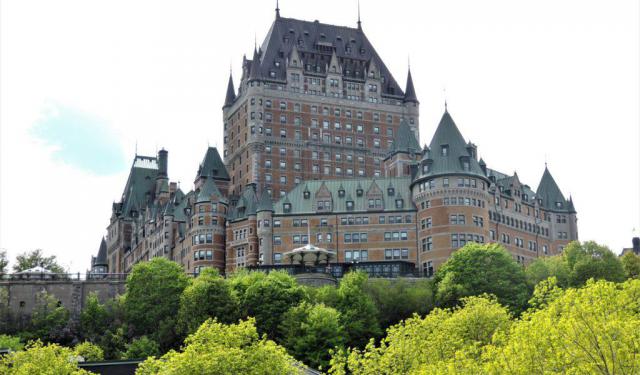 Quebec City – A Piece of Europe in Canada, Quebec City, Quebec (B)

My love for Europe is well documented, so I was thrilled to find a little piece of it close to home, without the 8 hour flight and a jet lag. Quebec City, located just 400 miles north of Boston ( a solid 8 hour drive non stop ), is a place where you feel like you stepped back in time. A combination of beautiful architecture, cobblestone streets and French spoken everywhere, almost has you fooled you are actually walking down the street in Europe. 2 days in Quebec City was enough to fall in love with this charming Canadian city.

Historic Quebec City has 2 parts : Upper ( Haute-Ville) and Lesser Town ( Basse-Ville ). Both parts are equally beautiful and charming. You can get between the two by either walking very steep stairs or hop on a 2 minute ride in the Funicular.

The old part of Quebec City was declared a UNESCO World Heritage Site in 1985. It’s the oldest French speaking community in North America. More than 95 % of people in Quebec speak French. No need to worry though, just like in Europe most people speak English as well. ...... (follow the instructions below for accessing the rest of this article).
This article is featured in the app "GPSmyCity: Walks in 1K+ Cities" on iTunes App Store and Google Play. You can download the app to your mobile device to read the article offline and create a self-guided walking tour to visit the attractions featured in this article. The app turns your mobile device into a personal tour guide and it works offline, so no data plan is needed when traveling abroad.