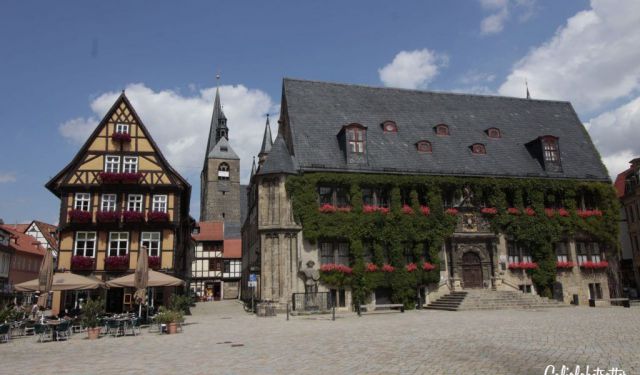 What could possibly be more idyllic than strolling through a medieval town with over 1,400 half-timbered houses down rows and rows of cobbled-stoned streets that haven’t changed much for hundreds of years on a sunny afternoon? Not much in my book!

Straddling the Bode River in the foothills of the Harz region in Saxony-Anhalt, Quedlinburg is one of the most romantic medieval towns in Germany and is more like a Disney pop-up storybook filled with history, architecture and treasure which entitled the town to become a UNESCO World Heritage site in 1994. Plus, with the surrounding Harz National Park steeped in legends and myths of witches and warlocks, what’s not to love about visiting!?

The town has a colorful history dating as far back as the 10th century when it was ruled by King Heinrich I, who is accredited with being the founder of medieval Germany, therefore, making Quedlinburg the first capital of Germany. The town became prosperous because of the nearby silver, copper and tin mines. Mathilde, King Heinrich I’s widow, founded a convent here for aristocratic women in 936 and her granddaughter would become the Abbess in 966. For the next 800 years, the town would be ruled by women (Go Women!), that is until Napoleon decided to invade in the early 19th century and disbanded the Abbey. So, it should come as no surprise when I mention that the first female doctor came from Quedlinburg. ...... (follow the instructions below for accessing the rest of this article).
This article is featured in the app "GPSmyCity: Walks in 1K+ Cities" on iTunes App Store and Google Play. You can download the app to your mobile device to read the article offline and create a self-guided walking tour to visit the attractions featured in this article. The app turns your mobile device into a personal tour guide and it works offline, so no data plan is needed when traveling abroad.