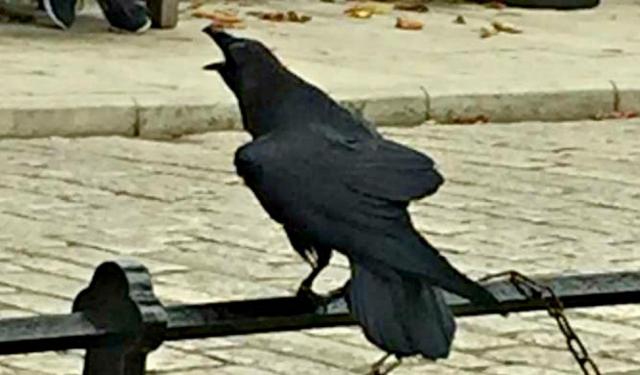 Ravens Protect the Tower of London, London, England (B)

On a recent trip to the Tower of London I became curious about the huge black birds hopping around the ground or sitting on sign posts. As it turns out, they were actually protecting their country. According to legend, if they ever leave the Tower, the Crown and Britain will surely fall. So it’s really important that these birds hang around.

Our story starts with a Welsh myth that tells of a giant king called Brân whose name means “raven” in Welsh. Brân was a mighty warrior, but alas, he was killed in battle. With his last breath he gave instructions for his head to be buried in London. His men faithfully complied and buried Brân the Raven’s head on the white hill (where the Tower of London now stands). It was positioned to face toward France, where the Raven could watch and protect the shores of Britain from invasion.

As time passed, the idea of a raven protecting the Tower, which had at first referred to the buried warrior’s head, became associated with the birds of the same name. ...... (follow the instructions below for accessing the rest of this article).
This article is featured in the app "GPSmyCity: Walks in 1K+ Cities" on iTunes App Store and Google Play. You can download the app to your mobile device to read the article offline and create a self-guided walking tour to visit the attractions featured in this article. The app turns your mobile device into a personal tour guide and it works offline, so no data plan is needed when traveling abroad.