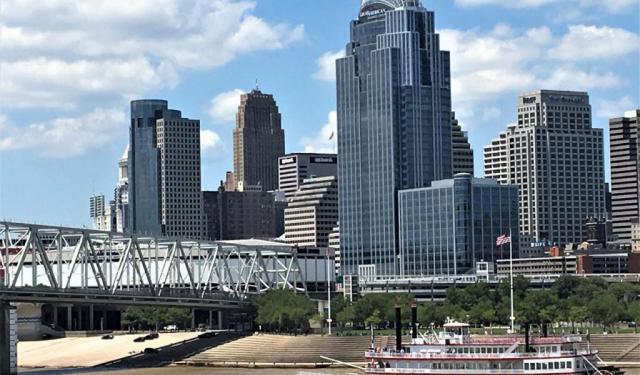 Once named the “Paris of America” and the first truly “American city” founded after the American Revolution, Cincinnati was once a bustling industrial city adding a new nickname, “Queen City” because of the population explosion. By 2001, Cincinnati had gained a rather notorious reputation for overtaking Compton as the “most dangerous city” in the US. But, after massive investments by the city’s Fortune 500 companies to rejuvenate downtown Cincinnati, it has now been ranked as one of the top places to visit in the US in 2018!

Nestled along the Ohio River at the confluence of the Licking and Ohio Rivers, just across the the state line from Kentucky, Cincinnati is now a beautiful blend of new and old, with modern and historic hang outs and where the Midwest meets the South. The area was settled in 1788 and became one of the fastest growing “boom towns” and by the mid-1800s, Cincinnati was one of the largest and wealthiest cities in America due to the steamboat trade as well as pork processing. ...... (follow the instructions below for accessing the rest of this article).
This article is featured in the app "GPSmyCity: Walks in 1K+ Cities" on iTunes App Store and Google Play. You can download the app to your mobile device to read the article offline and create a self-guided walking tour to visit the attractions featured in this article. The app turns your mobile device into a personal tour guide and it works offline, so no data plan is needed when traveling abroad.