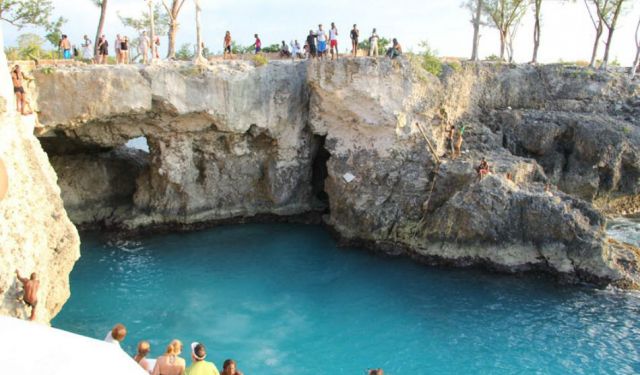 Rick’s Cafe has been a fixture in Negril’s West End since 1974. That’s when Richard Hershman, after whom the bar is named, decided to put a bar on a slice of land with a beautiful cove. Rick’s Cafe was the first establishment of its type in the West End and soon became the place where mostly visitors meet, drink and watch the spectacular sunset for which Rick’s Cafe is now famous.

When we arrived at Rick’s Cafe just after 1:00 p.m., only a few tables were occupied. By the time we finished our lunch and had a few drinks, the place was crawling with people. Most came to watch the divers — local guys who began taking headers off the cliffs and performing acrobatics at Rick’s as a way to make some money. I was surprised to see that visitors are now cliff jumping as it can be very dangerous for the inexperienced and especially for anyone who’s been drinking. I wasn’t close to the jump area or watching those who did to see if they had had anything to drink prior to jumping. To their credit, one of the lifeguard/divers did warn people loudly not to try a hand walking stunt as it could be dangerous. ...... (follow the instructions below for accessing the rest of this article).
This article is featured in the app "GPSmyCity: Walks in 1K+ Cities" on iTunes App Store and Google Play. You can download the app to your mobile device to read the article offline and create a self-guided walking tour to visit the attractions featured in this article. The app turns your mobile device into a personal tour guide and it works offline, so no data plan is needed when traveling abroad.