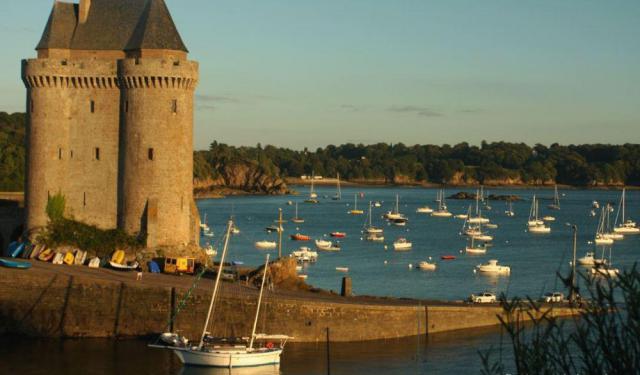 The sea is rough. The upcoming tide brings waves that crash into the beach which is not accessible anymore. It is night and the watchdogs have just been released from their cages, eager to fiercely eat anything alive on the shores of Saint Malo. All the inhabitants stay safe within the city walls, where no villains can get into after sunset. The wind is picking up, and with the rising of the moon, the tension is present as we see about 30 Anglo-Dutch vessels anchored in our bay. Our city and its impressive wealth acquired by its ship-owners trading with India and the Americas is a precious jewel for our enemies who just can’t measure up to our unbeatable sailors at sea. But will they succeed destroying our city? The sound of exploding gunfire makes it shake to its core.

I am standing on the hornet’s nest, the Bidouane Tower that 323 years ago was filled with gunpowder making it a target for the English and Dutch navies. The ship that was to blow itself up close to the tower to cause the most devastating damages to the rich city had drifted away and exploded killing only one cat. Standing on its walled citadel, I overlook the white sandy beaches on which towels of sunbathers form a colourful patchwork. The tide is low, opening the path to Grand Be, an island on which the famous romantic French writer Chateaubriand is buried. ...... (follow the instructions below for accessing the rest of this article).
This article is featured in the app "GPSmyCity: Walks in 1K+ Cities" on iTunes App Store and Google Play. You can download the app to your mobile device to read the article offline and create a self-guided walking tour to visit the attractions featured in this article. The app turns your mobile device into a personal tour guide and it works offline, so no data plan is needed when traveling abroad.