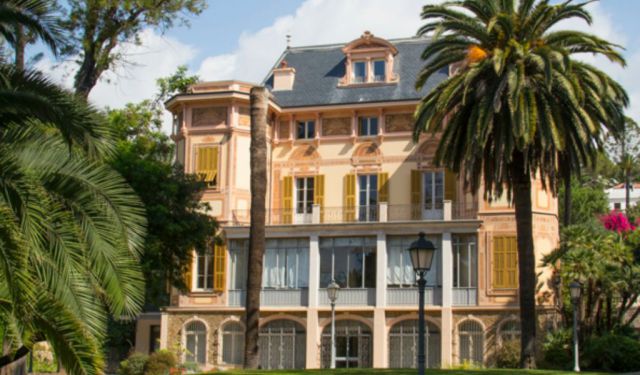 San Remo on the Italian Riviera, Sanremo, Italy (B)

Before I visited Sanremo (also spelt San Remo) I was unaware that Italy had a Rivieraand that, like the French Riviera, it became popular during the nineteenth because of the benefits to health it offered. However, in the rush to accommodate a flood of visitors a railway line along its coast detracting from its natural beauty. Now that line is being moved inland and the old track has been turned into a great cycle track, the Ponente Ligure, that stretches for twenty kilometres between San Lorenzo al mare and Ospedaletti and is, conveniently, punctuated with bike hire shops. This stretch of the Italian Riviera is in the region of Liguria and is on the part between Genoa and the French border known as the Riviera dei Fiori (flowers).

It is a very pleasant walk along the section of the cycle track that skirts the small port, Porto Vecchio, and marina, Portosole, of Sanremo towards the Villa Nobel. Alfred Nobel lived here for the last five years of his life and it is now a museum that includes the laboratory he built so that he could continue his experiments with dynamite, his invention that led to his expulsion from Paris. This Swedish scientist also held 355 patents for a stunning variety of inventions. He left a fortune in his will to fund the Nobel Prize honouring men and women from all corners of the globe for outstanding achievements in physics, chemistry, medicine, literature, and for work in peace. Following his death in 1896 Villa Nobel was sold in accordance with his wishes. During the 1960s the villa was bought by the local authority of Sanremo and has since been converted into a public museum. Sanremo is famous for the production of flowers – the surrounding area is populated by large greenhouses, and every year large quantities of flowers are sent to Stockholm to adorn the venue of the annual Nobel Prize Award Ceremony and Banquet. ...... (follow the instructions below for accessing the rest of this article).
This article is featured in the app "GPSmyCity: Walks in 1K+ Cities" on iTunes App Store and Google Play. You can download the app to your mobile device to read the article offline and create a self-guided walking tour to visit the attractions featured in this article. The app turns your mobile device into a personal tour guide and it works offline, so no data plan is needed when traveling abroad.