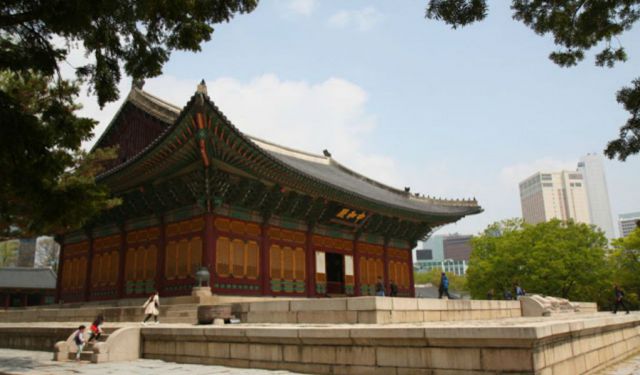 A blank slate for Day Two. All the planning was up to GaYeong, a friend I haven't seen in four years. She told me to meet her at exit 12 of City Hall Station (Seoul subway line 1 or line 2). Hugs and how-are-yous, then off to explore the area near City Hall Station.

First up, a cup of joe at Jeongdong Observatory to warm the body that breezy, chilly morning. We went up to the 13th floor of Seosomun Building where the observatory slash coffee shop was. The observatory/coffee shop overlooks Deoksugung Palace; and a little to the right, Seoul Metropolitan Library, Seoul City Hall, and Seoul Plaza; and the tall buildings and mountains beyond. I was pleasantly surprised by this little gem of a coffee shop. It was a great place to catch up and to start the day.

Warmed up enough, we went for a walk along Deoksugung Stonewall Road or Deoksugung Doldam–gil, the road on the south side of Deoksugung Palace. We strolled along the brick-laden sidewalks (with trees and benches every few meters) until we reached a little rotunda with a sculpture in the center. Then we traced our way back. Because, in truth, this stroll wasn't on the plan. It happened because we took a wrong turn. We were supposed to go to Deoksugung Palace straightaway after our cup of joe at Jeongdong Observatory. ...... (follow the instructions below for accessing the rest of this article).
This article is featured in the app "GPSmyCity: Walks in 1K+ Cities" on iTunes App Store and Google Play. You can download the app to your mobile device to read the article offline and create a self-guided walking tour to visit the attractions featured in this article. The app turns your mobile device into a personal tour guide and it works offline, so no data plan is needed when traveling abroad.