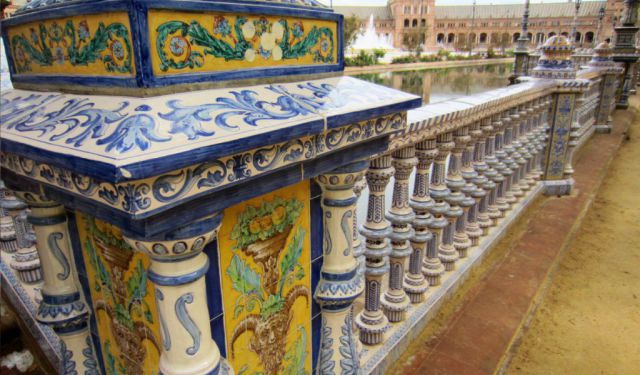 Sevilla in 6 Hours, Seville, Spain (B)

Sevilla has all of the elements of quintessential Span: beautiful tile work, quaint streets and squares dotted with orange trees, bullfights by day, flamenco by night and plentifully tapas that pair perfectly with wine. This was becoming a reoccurring theme during our 2-week trip to Spain, but something about Sevilla made it different. Call it the Spanish equivalent of je ne sais quoi, there was a certain charm in the air. Despite it being the 4th largest city in Spain (and former gateway for New World explorers like Amerigo Vespucci and Ferdinand Magellan), today’s Sevilla feels regal yet relaxed.

Even though my introduction to the city was brief – a daytrip from Madrid by way of Cordoba, which I also highly recommend – its character was apparent. While there was so much more to see than my half-day allowed, here is a snapshot of a few of my favorite places.

After arriving at the Santa Justa train station (following a 45 minute train ride from Cordoba), our first stop was Plaza de España. Before we hit the streets, we picked up a free map at the tourist information office in the station, located right above tracks 6 and 7. The man working the counter was super sweet and extremely helpful, taking the time to circle major sites and bus routes. To save some time, we took the C1 circular bus line from José Laguillo in front of the train station to the Prado San Sebastián stop, and then walked another 5 minutes or so to our destination. ...... (follow the instructions below for accessing the rest of this article).
This article is featured in the app "GPSmyCity: Walks in 1K+ Cities" on iTunes App Store and Google Play. You can download the app to your mobile device to read the article offline and create a self-guided walking tour to visit the attractions featured in this article. The app turns your mobile device into a personal tour guide and it works offline, so no data plan is needed when traveling abroad.