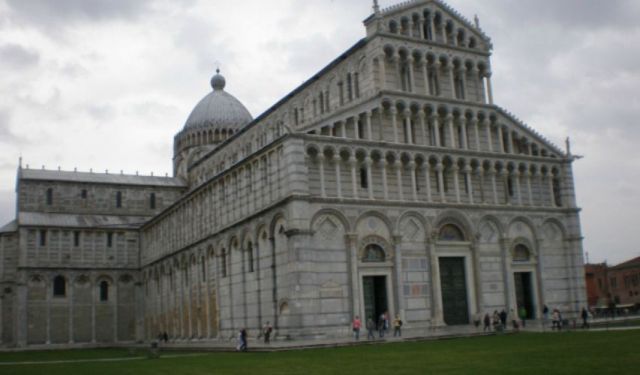 Should You Visit the Field of Miracles in Pisa?, Pisa, Italy (B)

This is one of those places that you’ll either love or hate. There’s no in-between. If you can disregard the tacky souvenir stalls and shady guys trying to sell you fake handbags or fake African souvenirs and focus just on the mind-blowing architecture of this place you’ll be fine. Otherwise you might go away feeling disappointed and bitter that you wasted your time/money on something that looks better in the photos than in the real life. But that’s the harsh reality of many famous landmarks around the world nowadays. But let’s get back to the basics.

Pisa was a powerful merchant/naval republic in the Middle Ages. Its rise to the power happened before Florence became the major player in Tuscany. When you’ve got loads of money, you have to flaunt it, right? So the people of Pisa decided to built something extraordinary to show off their wealth and hence the magnificent Piazza dei Miracoli.

Piazza dei Miracoli (Field of Miracles) is a UNESCO World Heritage Site site near the center of Pisa and as the name says it’s a rather large field with 4 magnificent edifices. There’s the Baptistery (the first building you can see on the field), the Cathedral, the Leaning Tower and the Monumental Cemetery (Camposanto). There are also two museums: the Sinopias Museum (Museo delle Sinopie) and the Cathedral Museum (Museo dell’Opera del Duomo). The name Piazza dei Miracoliwasn’t given at the time of the construction of the entire site but it’s a rather recent invention. An Italian poet Gabriele d’Annunzio named it as such at the beginning of the 20th century. ...... (follow the instructions below for accessing the rest of this article).
This article is featured in the app "GPSmyCity: Walks in 1K+ Cities" on iTunes App Store and Google Play. You can download the app to your mobile device to read the article offline and create a self-guided walking tour to visit the attractions featured in this article. The app turns your mobile device into a personal tour guide and it works offline, so no data plan is needed when traveling abroad.