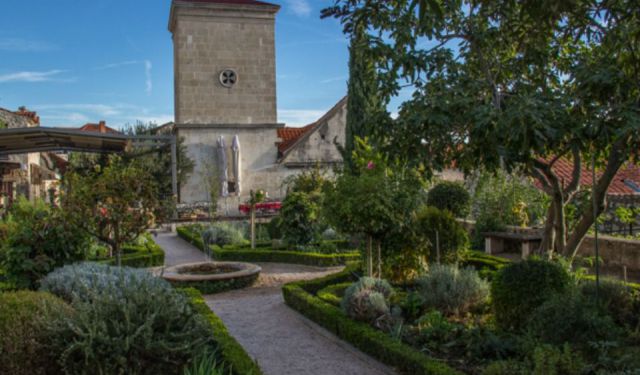 Šibenik, the Town of King Krešimir, in Croatia, Sibenik, Croatia (B)

Everyone needs a hero. For the inhabitants of Šibenik in the Dalmatia region of Croatiait is the Croatian King Petar Krešimir Hailed as the founder of the city there is some doubt about this accolade. But there is no doubt that this energetic king who ruled from 1059 until his death in 1074 was associated with this city. He mentions it in a proclamation made in 1066. Close to the sea front, presiding over a small park, is a splendid statue of the king. This park is dedicated to the botanist Roberto de Visiani, a recognized Croatian botanist, poet and philosopher, one of the founders of modern botany in Italy. The fountain in this square bears his name.

On the far side of the park I entered the modern hub of the city, Poljana. Originally this square was an open space outside the walled town. Horse races and archery competitions used to take place here. On one side of the square is Šibenik Theatre. Built in 1870 this theatre was patronized by the Emperor of Austro-Hungary, Franz Joseph, when Croatia was part of his kingdom. Today it hosts the Croatian National Theatre. A contemporary building opposite this theatre is occupied by the public library. This building incorporates part of a buttressed sixteenth century bastion. In a niche on the side of this bastion is a statue of the Archangel Michael the protector of the city. ...... (follow the instructions below for accessing the rest of this article).
This article is featured in the app "GPSmyCity: Walks in 1K+ Cities" on iTunes App Store and Google Play. You can download the app to your mobile device to read the article offline and create a self-guided walking tour to visit the attractions featured in this article. The app turns your mobile device into a personal tour guide and it works offline, so no data plan is needed when traveling abroad.