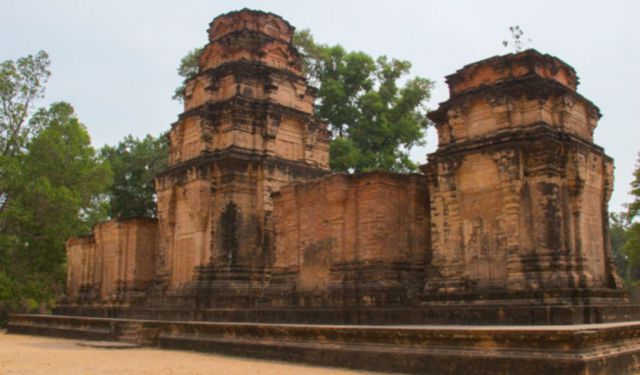 Siem Reap in Cambodia. My Visit to Angkor Thom and Tonle Sap, Siem Reap, Cambodia (B)

My recent visit to Siem Reap in Cambodia was my second visit there and I intended to profit from lessons learnt from that first experience. I had learnt that Angkor Wat is only one of many temples in the ancient city of Angkor Thom. Angkor was part of the Khmer Empire and during its ascendency it’s greatest king, Jayavarman VII (1181-1219), built Angkor Thom. Many of the original buildings, including its Royal Palace, were constructed in wood and no longer exist. Tourists flock to the area to visit these temples and the best way to avoid the crowds is to start early in the morning (the temples are open from 05:00) and not to follow the ‘prescribed’ order. Angkor Wat, the largest temple, attracts most of its visits in the late afternoon – to watch the sun go down – so we headed there early one morning.

On our way to Angkor Wat we had to stop at the ticket office to get our passes. As there were no queues it only took minutes to take our photographs (not the most flattering) and attach them to our pass. We were instructed to wear this pass at all times as they are regularly checked. Our bus dropped us off some distance from the temple itself but we had great views across the moat to the temple. As we walked along our guide, Kimthay, explained some of the mysticism surrounding the construction of the city and its temples. We started at the most famous temple of all, Angkor Wat, whose buildings cover an area of eighty-one hectares. It’s distinctive five towers are featured on the Cambodian flag and it is considered by art historians to be the best example of classical Khmer art and architecture. The enclosing wall represents the mountains at the edge of the world and the surrounding moat is the ocean beyond. It was the end of a long, dry season and a drought had set in but even so the moat was still full, fed by a reservoir built for the purpose. The complex was virtually empty and we were able to stroll around admiring the architecture, the elaborate decoration and tantalising glimpses of statues of Buddha. As we reached the third tier of the main temple the crowds were building up and we had to wait for short time before scrambling up the steep steps to the top level. Once there we were able to complete a circuit and appreciate the size of this complex and enjoy the views of the surrounding countryside. ...... (follow the instructions below for accessing the rest of this article).
This article is featured in the app "GPSmyCity: Walks in 1K+ Cities" on iTunes App Store and Google Play. You can download the app to your mobile device to read the article offline and create a self-guided walking tour to visit the attractions featured in this article. The app turns your mobile device into a personal tour guide and it works offline, so no data plan is needed when traveling abroad.