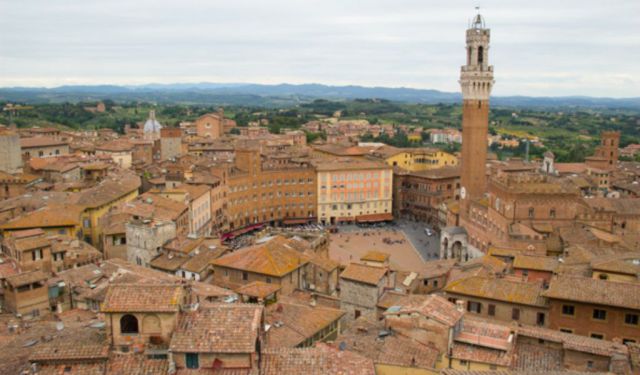 Siena beyond the Palio, Siena, Italy (B)

The Palio may be the jewel in the crown of Siena but this town has other gems worthy of consideration and in particular the old hospital of Santa Maria della Scala. Situated in the Piazza del Duomo and dwarfed by its elegant neighbour, the cathedral, I was so fascinated by its history that I decided to give it priority.

The building operated as a hospital for over one thousand years and it was not just the first hospital to be built in Tuscany but one of the first hospitals to be established in Europe. Set up on the Via Francigena or Pilgrim’s Way from Santiago de Compostela in Spain to Rome its initial purpose was to care for sick pilgrims who passed through the city, to look after the poor and to provide for abandoned children. It was the latter purpose that had sparked my interest. The hospital once had a door for the reception of foundlings. The baby would be placed in the cradle on the door and then the bell would be rung and the door would be swung round to collect the baby. All the foundlings were given the same surname, della Scala, and in just one year 300 children were given this surname. Scala means ladder or steps but it also means a stretcher which was significant as the building was also a hospital. However, reputedly, the hospital took its name from the steps of the cathedral opposite. The hospital looked after these foundlings, paid for their education and provided a dowry when they got married – all funded by donations and bequests from wealthy citizens of Siena. Established during the eleventh century by the canons of the cathedral and initially under their management the hospital later became the responsibility of the friars of the hospital and then in the fifteenth century it came under the direct control of the municipality of Siena. ...... (follow the instructions below for accessing the rest of this article).
This article is featured in the app "GPSmyCity: Walks in 1K+ Cities" on iTunes App Store and Google Play. You can download the app to your mobile device to read the article offline and create a self-guided walking tour to visit the attractions featured in this article. The app turns your mobile device into a personal tour guide and it works offline, so no data plan is needed when traveling abroad.