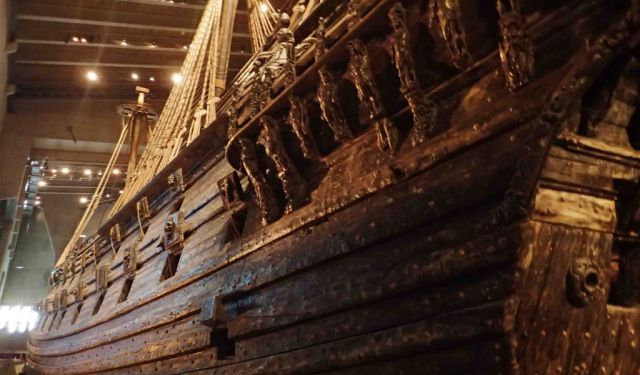 This morning we arrived at Stadhuset’s tower ticket office by 9am. We were one of the firsts to buy our ticket for the 9:15 entry. Our group was allowed 35 minutes in the tower…ten minutes to climb 348 feet, 15 minutes to look around, and ten minutes to go down. Our climb included a variety of stairs, some appeared newer than others, and then a ramp of bricks that seemed to spiral up and around the tower in straight, narrow passage ways with a slight jog every now and then. After the fifth time around, we wondered when it would end! The top of the tower offered lovely panoramic views of Stockholm. In the middle of the tower, several models which were entered in a competition for statues around the city hall were displayed. It was quite interesting.

From the tower, we walked over to Kungsgatan to catch the number 7 tram to Skansen, the number one attraction in Stockholm according to Suman’s book. We figured out we needed a one zone ticket, for a 15 minute ride for 36 Kronor or just over $4. I have to say, this city is expensive! ...... (follow the instructions below for accessing the rest of this article).
This article is featured in the app "GPSmyCity: Walks in 1K+ Cities" on iTunes App Store and Google Play. You can download the app to your mobile device to read the article offline and create a self-guided walking tour to visit the attractions featured in this article. The app turns your mobile device into a personal tour guide and it works offline, so no data plan is needed when traveling abroad.