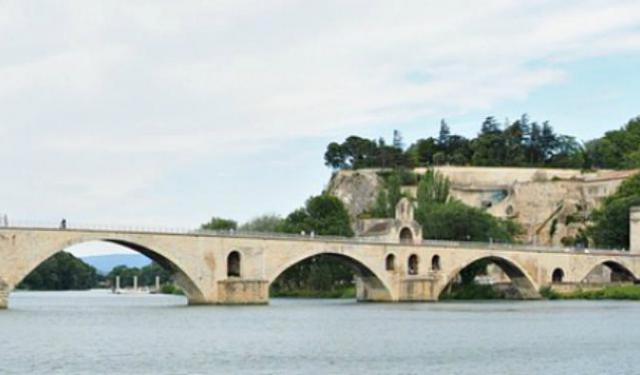 Singing About the Avignon Bridge, Avignon, France (B)

The Avignon bridge is known around the world today because of the famous children’s song, Sur le Pont d’Avignon (On the Bridge of Avignon). In medieval times, it was also a well-known bridge, but not because of this song – and it wasn’t known for being danced upon either.

First of all, the bridge was renowned as a marvel of construction. Twenty-two arches spanning 915 meters / 3,000 feet made quite an impression on the medieval observer. Secondly, it was associated with a miracle. A young shepherd called Bénezet heard the voice of God telling him to build a bridge across the Rhone. Then to prove that it was God, he picked up a huge boulder – so heavy that thirty strong men couldn’t move it. It was declared a miracle and the devout started making pilgrimages to see the bridge. Its fame spread far and wide – throughout France and beyond.

People started singing about this miraculous landmark as far back as the fifteenth century, when it was referred to in “pillow songs,” songs sung to newlyweds at midnight as they were served soup in their bedroom. It’s a mystery to me why people would go into the newlywed’s bedroom and sing about a bridge (or anything else for that matter) but I guess those were different times. ...... (follow the instructions below for accessing the rest of this article).
This article is featured in the app "GPSmyCity: Walks in 1K+ Cities" on iTunes App Store and Google Play. You can download the app to your mobile device to read the article offline and create a self-guided walking tour to visit the attractions featured in this article. The app turns your mobile device into a personal tour guide and it works offline, so no data plan is needed when traveling abroad.