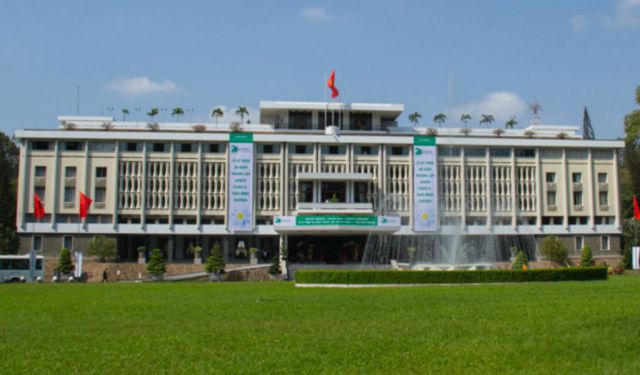 What do you do with twelve exhausted travellers who have arrived in Ho Chi Minh City at six in the morning – too early to check into their hotel? Take them to Trung Nguyen Legend coffee shop to drink Vietnamese coffee. It was here that my love affair with traditional Vietnamese coffee with condensed milk began. I started every day of our tour through Vietnam with this invigorating mix.

I was not aware that Vietnam produced coffee so it was a surprise to learn that it is the second largest producer of coffee in the world, second to Brazil. The French established a thriving coffee industry in South East Asia at the end of the nineteenth century and since then Vietnam has become the leading producer of coffee due to its ideal climate and landscape. Several different varieties of coffee grow well here and this, combined with good roasting techniques has resulted in some excellent coffee. There are several different varieties including one of the world’s most famous coffees, the Legendee, l commonly referred to as Weasel coffee. This is a unique enzymatically-treated coffee that, apparently, releases flavours from the beans that are not released during mechanical processing. The official name comes from stories about natives who drank a brew made from coffee beans that had been partially digested by small furry animals that have come to be referred to as weasels but are more likely to have been a civet. This very expensive coffee is now produced by Trung Nguyen using natural enzymes that duplicate the process leaving weasels out of the equation. Nevertheless, I was not tempted to try it. But I was tempted to try the green tea sponge cake on display in coffee shop. I should have known that something so green was probably not going to taste great! It did not, but it looks very pretty. ...... (follow the instructions below for accessing the rest of this article).
This article is featured in the app "GPSmyCity: Walks in 1K+ Cities" on iTunes App Store and Google Play. You can download the app to your mobile device to read the article offline and create a self-guided walking tour to visit the attractions featured in this article. The app turns your mobile device into a personal tour guide and it works offline, so no data plan is needed when traveling abroad.