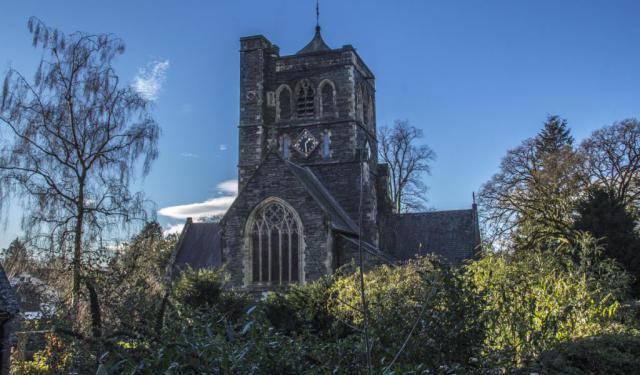 The Cumbrian towns of Windermere and Bowness in the Lake District, have merged together to form one conurbation. Windermere, the newest of the two, embraced the arrival of a railway line in 1847 whereas Bowness, a long-established settlement refused to accept it. Today there is a train station in Windermere and ferries and pleasure boats depart from Bowness Pier on Lake Windermere so it is a happy union. I stayed in Windermere. I soon discovered that next to the parish church of St Mary was the start of an easy path to a viewpoint known as Queen Adelaide’s Hill.

I followed the path down the hill to the main road, crossed the road and went through a kissing gate onto to a track that led to the top of Queen Adelaide’s Hill. It was not too steep and I was soon at the top and looking down on Lake Windermere. A few curious sheep were my only companions. This hill is named after Queen Adelaide, widow of King William IV and the aunt of Queen Victoria after she visited Windermere in 1840. It is recorded that she and her party climbed this hill to admire the view. A plaque was placed at her point of landing on the shore of the lake. Queen Adelaide also gave her name to the city of Adelaide in Australia. At the bottom of the hill there is a path that goes through the National Trust gate and follows a stream called Wynlass Beck to the shore of the lake. This area is known as Millerground as it is believed that a corn mill once stood here. I did not linger long as my next objective was another view point, Orrest Head. ...... (follow the instructions below for accessing the rest of this article).
This article is featured in the app "GPSmyCity: Walks in 1K+ Cities" on iTunes App Store and Google Play. You can download the app to your mobile device to read the article offline and create a self-guided walking tour to visit the attractions featured in this article. The app turns your mobile device into a personal tour guide and it works offline, so no data plan is needed when traveling abroad.