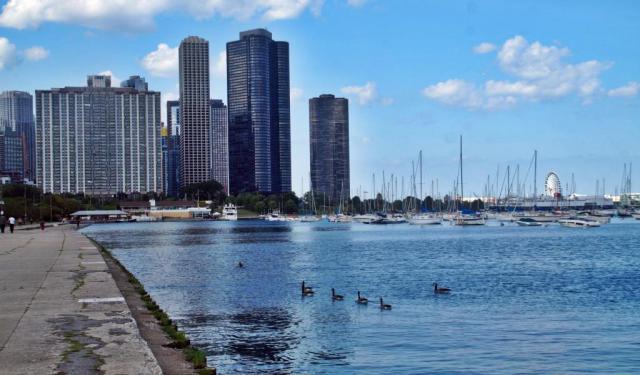 The last leg of our journey on Route 66 from Los Angeles to Chicago, was supposed to be driven on August 21st after the total solar eclipse, but things didn’t go quite as we had planned. Getting out of the park, where we watched the eclipse, was easy enough, but getting from Carbondale to St Louis, where the last leg of Route 66 would begin, proved much more time-consuming than we had ever imagined. It seemed like the entire city of Chicago had come to Carbondale to watch the eclipse. The queue was enormous. We were driving along at snail’s pace. Everyone was going the same direction as us, at least until we were able to turn off for St Louis instead of Chicago, where the queue continued. At 9 PM, we finally arrived in St Louis, exhausted after 7 hours on the road. Usually, it would only have taken 2 hours to drive from Carbondale to St Louis, so we could’ve easily made it to Chicago from there as well, but that would have to wait for the next day, leaving us with only half a day to explore the windy city. Thank goodness for the car deal we got, when we had to miss out on the Death Valley! We stayed overnight in Motel 6, and then left early the next morning for Chicago via the historical Route 66. For the first time on this trip, it was actually raining when we got up! I was really happy for the change in temperature, as we’d been sweating in 40+ degrees the day before! Route 66 is represented by 289 glorious miles through Illinois, heading diagonally across the state, passing through endless fields of corn for as far as the eye can reach in this Prairie State. But this flat and lush agricultural state of the Midwest also offers several atmospheric Route 66 towns that each have their own charm and distinctiveness. ...... (follow the instructions below for accessing the rest of this article).
This article is featured in the app "GPSmyCity: Walks in 1K+ Cities" on iTunes App Store and Google Play. You can download the app to your mobile device to read the article offline and create a self-guided walking tour to visit the attractions featured in this article. The app turns your mobile device into a personal tour guide and it works offline, so no data plan is needed when traveling abroad.