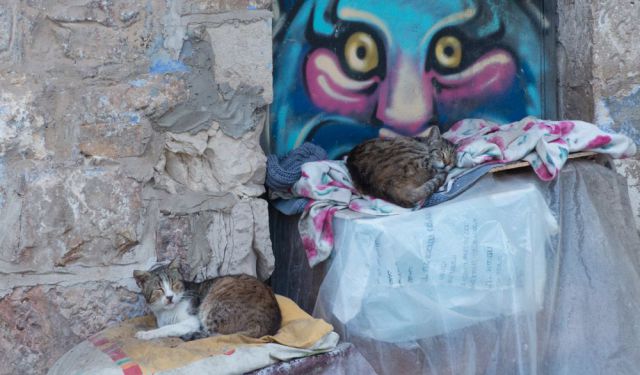 Street Art of Nachlaot and the Machane Yehuda Market, Jerusalem, Israel (B)

One of many surprises about Jerusalem was how much there was to see in the “new” town, the area outside the Old City. One such discovery was the Nachlaot district and the neighbouring Machane Yehuda Market. This is a fascinating area, not least for the street art that seems to be around every corner.

Until the end of the 19th century everyone in Jerusalem lived within the walled city. Beyond the walls was a wilderness frequented by brigands and wild animals. However the population was expanding, and more homes were needed. One man, Sir Moses Montefiore, decided to move outside the city and establish a new Jewish community. To make the new houses as safe as possible he built them close together, and right by the city walls.

The area that became Nachlaot consisted of several different neighbourhoods, each clustered around a small central courtyard. Many members of the first families who lived here grew up to become eminent citizens; you will see plaques commemorating them as you walk around. But as time went on people started to move into the suburbs and Nachlaot went into decline. Houses were abandoned and drug dealing was rife. ...... (follow the instructions below for accessing the rest of this article).
This article is featured in the app "GPSmyCity: Walks in 1K+ Cities" on iTunes App Store and Google Play. You can download the app to your mobile device to read the article offline and create a self-guided walking tour to visit the attractions featured in this article. The app turns your mobile device into a personal tour guide and it works offline, so no data plan is needed when traveling abroad.