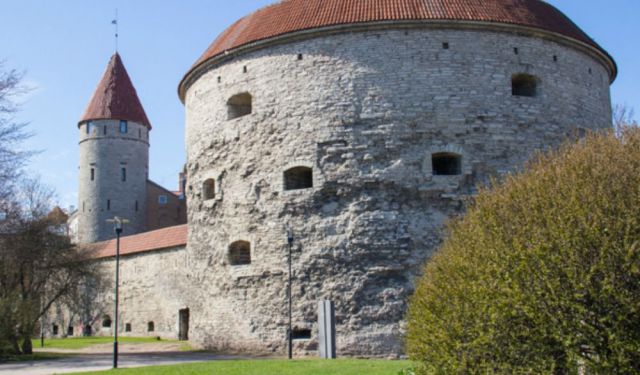 During the Middle Ages the Estonian Vikings were a thorn in the side of Denmark, a great military and mercantile power at the time. In 1219 the Danish fleet sailed into the harbour of Tallinn, and claimed possession of Tallinn and Northern Estonia. A claim that was upheld by the Pope. Denmark ruled Estonia until 1343 when the country was taken over by the Teutonic Order intent of converting pagan Estonia to Christianity. This order was a small, voluntary and mercenary order formed help Christians on their pilgrimages to the Holy Land. These Teutonic Knights served as a crusading military order to protect Christians in the Holy Land and the Baltics. Denmark subsequently sold Tallinn to Germany where the order had originated. Once these Crusaders or Iron Men had taken over Tallinn they ruled the town from the castle established by the Danes on Toompea Hill. This castle has always been the seat of government in Estonia and today it is home to the Parliament of Estonia. The castle has been revamped over the centuries and was revamped between 1767 and 1773 when it was given a pink, late Baroque façade. ...... (follow the instructions below for accessing the rest of this article).
This article is featured in the app "GPSmyCity: Walks in 1K+ Cities" on iTunes App Store and Google Play. You can download the app to your mobile device to read the article offline and create a self-guided walking tour to visit the attractions featured in this article. The app turns your mobile device into a personal tour guide and it works offline, so no data plan is needed when traveling abroad.