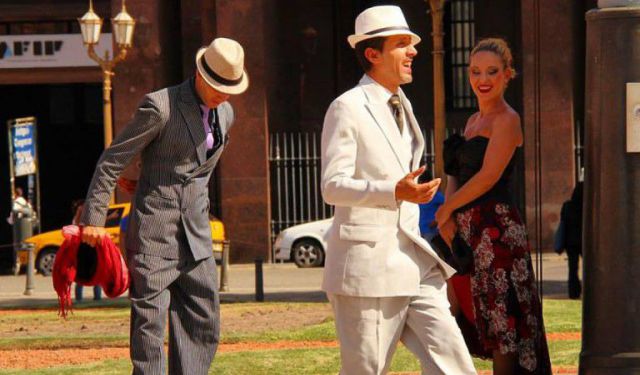 Saying Buenos Aires you say tango and when you think tango you picture it in the streets of Buenos Aires… Often when we think about this combination we imagine elegant couples dancing with pure, perfect movements, being accompanied by professional musicians, but tango was born in the port’s brothels, near la Boca. In these colorful tin houses where loneliness and poverty were regular guests and where sex was the king, immigrants from everywhere came to seek comfort and company, giving birth to a genuine exchange of customs and traditions which soon began to merge to create “the porteno soul”.

Tango is nothing but a sublime mix of popular music, mazurka, polka, pianori (music of the pampa) and candombe (the drum rhythm of African slaves) often played by the customers themselves while waiting for their turn of paying pleasure. An amalgam of sounds and emotions that speaks of loneliness, fate, pain and frustrated passions. The dance of pain.

Originally an obscene dance, due to both choreography and song lyrics. A dance that only in 1912, with universal suffrage in Argentina, was introduced in the customs and traditions of the country, ceasing to be “the thing of the outcasts”. In a few years tango became a worldwide phenomenon, consecrated in Parisian cabarets and by intellectuals who began to compose its music and lyrics transforming the obscenity in romance and nostalgia … since 2009 is even an UNESCO intangible heritage of humanity. ...... (follow the instructions below for accessing the rest of this article).
This article is featured in the app "GPSmyCity: Walks in 1K+ Cities" on iTunes App Store and Google Play. You can download the app to your mobile device to read the article offline and create a self-guided walking tour to visit the attractions featured in this article. The app turns your mobile device into a personal tour guide and it works offline, so no data plan is needed when traveling abroad.