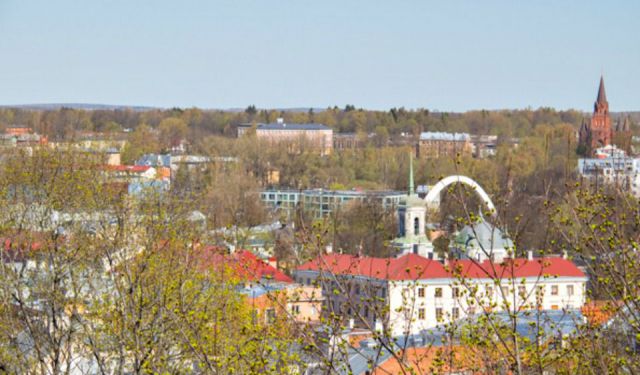 Tartu, the Cultural Capital of Estonia, Tartu, Estonia (B)

Tartu, in Estonia prides itself on being the town of good or free thinking. Some free thinkers may consider the tradition of walking over the arch of the Kaarsild pedestrian bridge (pictured above) to prove that person is courageous is a good idea. Others may think this is dangerous and worthy of the fine that the police can impose. Somehow this town avoids extremes and produces interesting and harmonious projects. The Estonian National Museum, which opened in October 2016, is its latest triumph.

Various collections relating to the history of Estonia are now housed in a super-modern building that looks more likely to house space ships than historical artefacts. Visitors may wonder why this new museum was built on barren wasteland outside the city centre. This area is very much part of the history of Tartu as it was once an aerodrome. Air field Raadi (also known as Tartu Air Base) began operations in 1912 when Estonia was occupied by Russia. After Estonia gained independence in 1920 two hangars were built at Raadi and the airfield was expanded. In 1940 the Soviets took control and banned all flying. The Germans drove the Russians out of Estonia and began upgrading the airfield with a concrete runway. After the Soviets regained control of Raadi in 1944 the Luftwaffe bombed the airfield and destroyed several historical buildings. One of these buildings, Raadi Manor, housed the first National Estonian Museum. After the Second World War the airfield was expanded and became a secret Soviet air base. Tartu was cut off from the outside world and only permitted to meet family and friends once a year at a designated place outside Tartu. During that period large mounds were built around the airfield to conceal the aircraft using the base. ...... (follow the instructions below for accessing the rest of this article).
This article is featured in the app "GPSmyCity: Walks in 1K+ Cities" on iTunes App Store and Google Play. You can download the app to your mobile device to read the article offline and create a self-guided walking tour to visit the attractions featured in this article. The app turns your mobile device into a personal tour guide and it works offline, so no data plan is needed when traveling abroad.