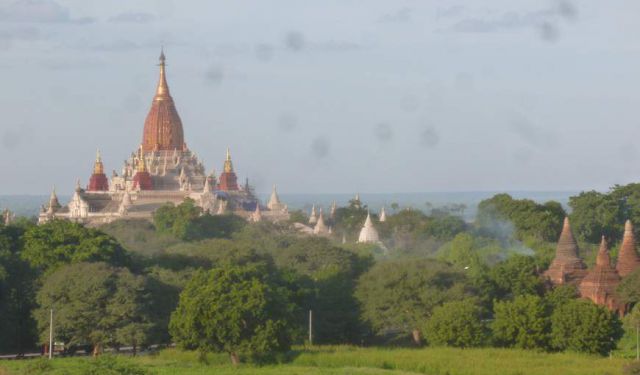 It was 9am and we were touring the Temples of Bagan Myanmar the temperature was already close to the expected 32 degrees Celsius. November time in Myanmar is hot and dry and daily temperatures hover between 32 and 34 degrees.

Wilson, our driver, appeared at the entrance to our hotel – the Bagan Umbra – with his trusted horse already hitched to the cart and ready to go. Wilson was brought up amongst the Temples of Bagan. He checked that we have ample water, sunscreen, insect repellant and a hat as we are not expected back at the hotel till after sunset.

Bagan, located in the Mandalay region of Myanmar, is famous for its 2,200 temples and pagodas that lie in an area of over 104 square kilometers. Once the Capital of the Kingdom of Pagan during the 9th – 13th century the area originally had well over 10,000 Buddhist temples made up of 1,000 stupas, 3,000 monasteries and 10,000 small temples.

Between the years of 1904 and 1975 the area experienced over 400 earthquakes, which damaged thousands of the temples leaving only 2,200 standing. During the 1990’s the Military of Myanmar took it upon themselves to renovate and repair those that were left standing. Unfortunately they used modern materials and their renovations were not sympathetic to the original construction and features of the temples and pagodas, even to the extent of building over some. Myanmar has approached UNESCO to apply for World Heritage Status for the Temples of Bagan but due to the military’s approach to the renovations UNESCO has declined at this stage. ...... (follow the instructions below for accessing the rest of this article).
This article is featured in the app "GPSmyCity: Walks in 1K+ Cities" on iTunes App Store and Google Play. You can download the app to your mobile device to read the article offline and create a self-guided walking tour to visit the attractions featured in this article. The app turns your mobile device into a personal tour guide and it works offline, so no data plan is needed when traveling abroad.