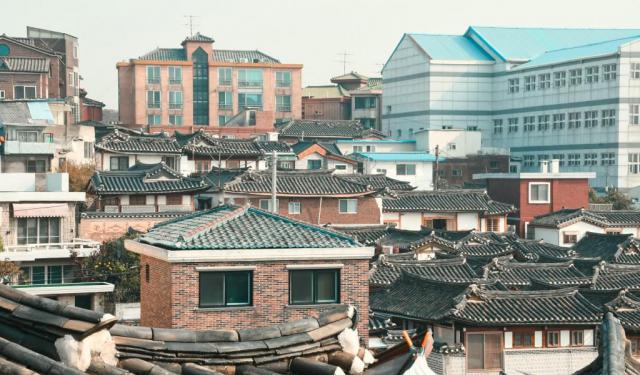 Bukchon Hanok Village is one of the most visited places in Seoul – and with good reason! It’s easy to get lost in the narrow streets of Bukchon but if you want a clear overview and route, you should check out the most beautiful photo spots in the village, also called the 8 views of Bukchon.

Bukchon Hanok Village should be on every Seoul itinerary as it is one of the oldest neighborhoods in Seoul. It is situated on the top of a hill between Gyeongbok Palace, Changdeok Palace, and Jongmyo Royal Shrine and consists of many narrow alleys, traditional Korean Hanok houses and showcases a 600-year-old urban environment. Bukchon used to be the residential quarter of high-ranking government officials and nobility during the Joseon Dynasty and comprises the neighborhoods of Wonseo-dong, Jae-dong, Gye-dong, Gahoe-dong, and Insa-dong.

Start your tour of the 8 views of Bukchon with this amazing view of Changdeokgung Palace. This beautiful complex is one of the “Five Grand Palaces” built by the kings of the Joseon Dynasty (1392–1897). ...... (follow the instructions below for accessing the rest of this article).
This article is featured in the app "GPSmyCity: Walks in 1K+ Cities" on iTunes App Store and Google Play. You can download the app to your mobile device to read the article offline and create a self-guided walking tour to visit the attractions featured in this article. The app turns your mobile device into a personal tour guide and it works offline, so no data plan is needed when traveling abroad.