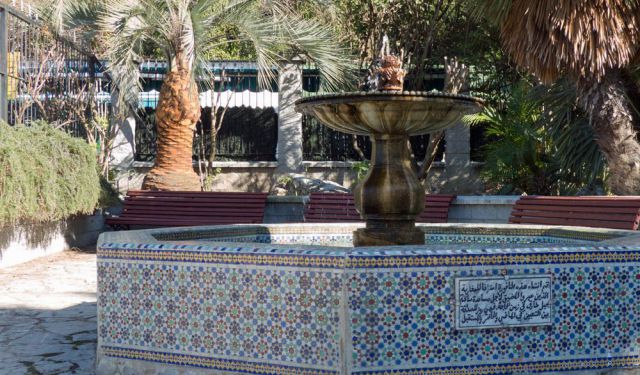 The Alameda Botanic Gardens are one of the must-see places on Gibraltar. There is much to recommend them: a beautiful setting, with a wide variety of plants, and an intriguing blend of the everyday and the exotic. And, for those of a literary bent, there is the curious association between Gibraltar and Molly Bloom…

The Alameda Botanic Gardens have an enviable position on the lower slope of the Rock of Gibraltar, with glimpses of the Mediterranean far below. They were created in 1816 as a recreation area for soldiers and as a shady place for local inhabitants to escape the fierce summer sun. But their origins are even earlier: some of the oldest trees in the garden were already there in 1816.

The Botanic Gardens fell into decline but were renovated in 1991. Today they are a popular place for weddings, and there is a theatre for open air performances. There is also a small Zoo, a sanctuary for confiscated animals and unwanted exotic pets.

Even in February the gardens were bursting with colour. There were cacti, ripe oranges and dragon trees. The air was filled with squawks and shreiks, from the birds in the trees and the animals in the Alameda Wildlife Park. And water plays a part, with an ornate Moorish fountain by the entrance, and a waterfall and fishpond inside the garden. ...... (follow the instructions below for accessing the rest of this article).
This article is featured in the app "GPSmyCity: Walks in 1K+ Cities" on iTunes App Store and Google Play. You can download the app to your mobile device to read the article offline and create a self-guided walking tour to visit the attractions featured in this article. The app turns your mobile device into a personal tour guide and it works offline, so no data plan is needed when traveling abroad.